Comixtribe is an independent comic's publisher that has put out some neat stuff. They started out super small-press, not even using Diamond Distributors as they were just so new and little-known. Instead they went directly to comic stores and would see if said stores were interested in stocking their comics. That is how I came across some of Comixtribe's stuff a bit ago in one of my stores, "Newcastle Comics". I've been happy to see they have grown enough to the point you can now find their fine books in "Previews". Thanks to my store having a good stock of it, I have read everything they have put out so far. Therefore, I thought I would discuss their comics.

This has had the most issues put out so far, with three currently released. This is has been described by folk as "Ocean's 11" with superpowers and I'd agree. You've got a team of people trying to run a con-job on a casino owned by a former member of their team who screwed them all over awhile ago. It's a a fun read that I've enjoyed but have a complaint about. The art is quite nice, but doesn't always make all the characters look too different, which can be a problem as the story mainly focuses on a few of them resulting in the rest feeling a bit interchangeable or otherwise forgettable. The plot itself is continuing to intrigue me however, as the twists and turns are not always what I expect--a hard trick to pull off on someone who has read enough comics to often accurately predict what is going to happen in a book.
3 out of 5 stars (for all the issues together) 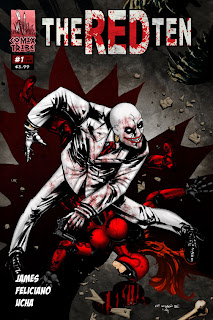 I supported the "Oxymoron" Kickstarter and was pleased to see it grow into a bigger hardcover with nice alternate covers and other goodies. I supported it at the level where (with some extra funds for other goodies I wanted) I got the signed book (with a snazzy alternate cover) and it had an artist's sketch inside, some pins, a bookmark, an art print, and Kickstarter-exclusive alternate-cover versions of "The Red Ten" #1 and #2. All this was 40-ish dollars and a good deal if I do say so myself. The "Oxymoron" book focuses on the villain of, "The Red Ten" as he engages in various adventures, some humorous, others gruesome. While he may be inspired by the joker what with the grin and his nemesis being an analogue of Batman, Oxymoron is unique enough that it doesn't bother me. He's a villain obsessed with contradictions enough to a point he'll even do seemingly "heroic" things such as fight zombies attacking the town because he can't stand something as oxymoronic as the "living dead".
Oxy is no sweetheart however, doing things in his hardcover to people that are just cruel and monstrous. Be it forcing a supposedly "selfless" man to make a horrible choice, or crashing a beauty pageant and making everyone grossly deformed, Oxymoron is a sick man. That makes it all the more interesting how in the first issue of "The Red Ten" Oxymoron apparently has killed himself after killing the hero who always stopped his exploits. Having lured the rest of the heroic group to his island however things get interesting when it becomes apparent everyone is going to be killed one-by-one. The heroes are all substitutes of sorts for other famous heroes--which is acknowledged in the first issue's afterword--but as is also pointed out, because these aren't Superman or somebody else we actually could see these characters die. Plus, the heroes that have spoken so far have enough of a personality all their own I don't mind the clear similarity to other "big name" heroes.

The dark humor of the "Oxymoron" book is enjoyable, plus the "And Then There Were None," styled retelling with superheroes in, "The Red Ten" also is proving fun. The characters in these books seem to have more personality than in, "Scam," and my only issue with these publications might be that because the "Oxymoron" book has a variety of writers and artists at times the tone and look can seem to swing from funny to scary at a jarring pace. "The Red Ten" is a bit more tonally consistent so that isn't a problem with the comic series. I would definitely recommend "The Red Ten" if you want a fun tale where the heroes may actually meet their doom (spoiler for those who never read "And Then There Were None", it doesn't end happily). If you find yourself intrigued by the character of Oxymoron then check out his book too, though it isn't necessary to get enjoyment from "The Red Ten".
Oxymoron Hardcover
3.5 out of 5 stars
The Red Ten (both issues)
4 out of 5 stars. 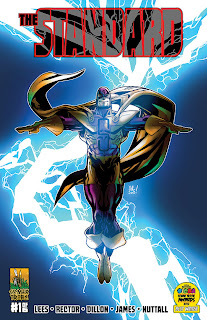 Only one issue of this has come out so far (via Comixtribe, it was distributed in the UK previously) but I've enjoyed it so much this is probably the Comixtribe comic I'm most excited to read more of. It is focused on how there was a superhero named "The Standard" who retired and his protege took over. The protege revealed his identity however and now is a celebrity who does more work for his reality TV show than actually fighting serious crime. The shock ending of the first issue is what really grabbed me and made it apparent the old "Standard" is going to need to come back to hero-ing. The comic has a single artist but he alters his style to show the old-times with the Standard being fun and fluffy while in the present day things can get pretty grim and violent as that shocking ending showed. The next issue can't come soon enough!
4.5 out of 5 stars.

Conclusion: Give Them A Try
Sometimes it can be scary to try a comic by a company you haven't ever read the work of, or which features new characters. You shouldn't be afraid to try new stuff however, because you might discover a neat publisher with some snazzy books. Comixtribe's works aren't perfect, but of a great quality and very enjoyable. You should definitely give one or two of their publications a try if you want comics about powered-folk with interesting twists.