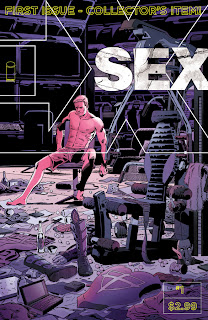 I am unabashedly a huge Joe Casey fan and hope to make some mega-post in the future breaking down a bunch of his works that I have read and enjoyed. Therefore, I picked up his 1st issue of "Sex" not sure what to expect other than that I would at least have some fun reading the comic. Sure enough, it was a good debut but had some things that worked for it and at other times against it. For fun let's break things down that way!

What worked for "Sex" #1
The art is beautiful. I have never seen Piotr Kowlalski's illustrations before but they work wonderfully in this comic. Much credit should be given to the colorist, Brad Simpson too, as the beauty behind the neon-drenched feel of the comic is thanks to him.

The comic takes the time to make our protagonist, Simon Cooke, seem like an interesting character. He is a rich businessman who clearly used his means to fight crime before quitting due to a dying request of someone he cared about named Quinn.

For a comic titled "Sex" Joe Casey cleverly doesn't start letting things get dirty until towards the end of the comic when yes, there is a fair amount of sexual activity. Even when that occurs however there is a fascinating alternation between our hero viewing a sex act and remembering his promise to a dying older woman (the aforementioned Quinn) that he would stop being a super-hero after so many years of doing so.


What didn't work for "Sex" #1
We never see Simon when he was "The Armored Saint". This might be intentional and we won't see Cooke's super-hero identity for quite some time in the comic, but it did feel a bit odd.

The random high-lighting of words was more distracting than interesting. It just seemed random how some words would look like a randomly-colored highlighter was run over them for no apparent reason.

Even though in interviews Joe Casey has said that while Cooke was "The Armored Saint" he did nothing but fight crime and therefore didn't have a social life, the first issue of this comic only hints at that with Cooke's talking with the elderly Quinn. She says he lived, "A monk-like existence," and clearly there was a, "perverse thrill," in his dressing up as a hero, but the comic doesn't really make it seem like Cooke is all that sexually-repressed--at least at first.

In Closing
The idea of a super-heroes being sexually repressed and taking that repression out through violence is a fascinating one. Once the ability to get out all those repressed feelings by fighting other costumed folk is taken away, what does a hero do with all these urges? Like a teaser for the comic said, "What Happens When The Superhero Power Fantasy Ends?" That is why I am very interested in seeing where this comic goes even if the first issue didn't start to explore the psychological territory we were expecting very much in the issue.

Then again, first issues can be difficult because you have to introduce the reader to a world, its characters, the plot--all of that jazz. I'm interested to see where the comic goes even if the first issue wasn't amazing--just pretty entertaining. Plus, no matter what it will look good.
3.5 out of 5 stars.
Posted by David Charles Bitterbaum at 12:31 AM