"Happy" OR This Mini-Series has Been Atrocious
I've read much of Grant Morrison's work. My favorite comic, "The Filth," is by him along with many other writings I adore. He has written things I didn't care for, but hated? No, I've never hated anything by him...until now.

"Happy" was an Image comic that basically consisted of Morrison trying to be like Garth Ennis (even getting a frequent collaborator of Ennis', Darick Robertson) with a hint of the ol' Morrison-wackiness (but not nearly enough). Whether this was meant more as an homage to Ennis or a critque of his work I don't know, but this was terrible. Yes, Garth Ennis uses a lot of swearing in his work, but Morrison just stinks at it--having characters keep yelling, "Cunt," for no discernible reason isn't edgy, it is just annoying. The only thing really going for this comic is Darick Robertson's excellent art (and one scene I'll mention later). Also, the idea of this peppy flying horse named, "Happy," existing in the depressing world of this comic is sort of cute, but as I stated, this whole thing is a mess.
Morrison wants to tell us a tale of a cop-turned hit-man who has the whole mob after him due to some special password that lets one access a ton of money. A missing girl who is going to be used for a sick movie with other kids and happens to be his daughter (we learn later in the series...um, spoiler alert) has an imaginary friend which goes to our "hero" named Nick and tells him to go rescue the girl. Plus there is some kind of aforementioned password to access a fortune and a policewoman who was once Nick's friend, and...oh who the hell cares? I'm trying to scrub this series from my memory as it is.

This series was just four issues but felt like it took forever. "Happy" the magical horse didn't appear until near the end of the first issue and it wasn't until the fourth that much of a plot comes into play. A lot of the time we just get filler in the form of supposedly "scary" characters talking about how much they enjoy torturing people, or a bunch of swearing for no apparent reason.

The one thing that keeps this from being potentially one of the worst comics I've read is that Robertson makes some amazing art and there is one--count em'--one scene that is kind of neat. Nick plays a poker game against some toughs and one points out that maybe whatever strange entity he is talking to is not so much a tool as it is psychosis. 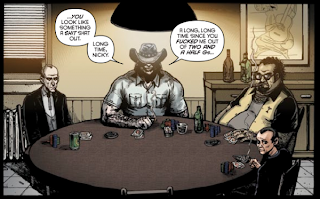 Otherwise we just get a comic that I did not enjoy, at all. These four issues have been a pain to go through and maybe that the last issue of this Christmas-themed comic came out after Christmas should have been warning enough for me to quit while I was ahead. Seriously though, Morrison has made some amazing works but this has not been one of them. Don't try to ape Garth Ennis, Grant, just do your own thing.

"Happy" Issues #1-#4
.5 out of 5 stars (the art and one interesting scene saves this from my rare zero-rating).