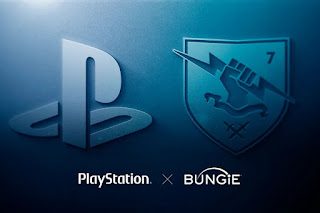 Has anyone used the term, "Video-game Acquistion Wars," yet? If not, I'm going to start using it, as that has been what we've witnessed this month. First, Take-Two acquired Zynga for the seemingly hefty sum of 12.7 billion dollars. Then, Microsoft scooped-up the plauged-by-controversy Activision-Blizzard for an insanely massive 68.7 billion in bills. I reported on both those events and when Microsoft made its move I wondered what Sony might do in response.

Well, I guess we have an answer sooner than I expected as Sony was already working on--and now officially can announce they are buying--Bungie (formerly of, "Halo," fame and now the company behind, "Destiny," and other allegedly in-development new games). For a relatively cheap--compared to the other deals--$3.6 billion, Sony will have Bungie be an independent subsidiary that does its own thing but basically gives profits to Sony. They can still be multiplatform at Bungie and put their games on other consoles, they just give Sony a cut. The video-game acquisition wars are undoubtedly not done and will probably only get more vicious. Now we wait and wonder, "Does Nintedo have anything up its sleeve like back in the day when it and Sega were brutal to each other?" We shall see.