WorldBox is a Fun Sandbox-Style Game 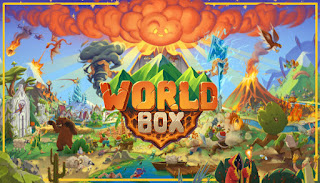 I read some articles discussing WorldBox on Rock Paper Shotgun and it sounded quite fun. A sandbox videogame where you don't actually control any characters or what they build. You just set up the World, tweak it to your liking, plop humans/orcs/elves/dwarves down and witness as they build kingdoms and develop their cultures and tech. Farms and roads are discovered, kingdoms declare war, and in the meantime, you can add extra resources, or if you feel like a stinker plop a volcano in the middle of everything.
It is pretty easy to learn, "Worldbox," but there is a depth you can explore as the World keeps developing and growing. Plus, watching the characters adapt to whatever mayhem you sometimes throw their way is a hoot. Check the site out and get it for your PC/Mac/Linux/Android/iPhone. I played it on my iPhone and really like it. The game is still in an earlier development stage so more features will be added over time as well--hence I don't want to offer an official review, but will say what already exists is good fun.
Posted by David Charles Bitterbaum at 10:44 AM