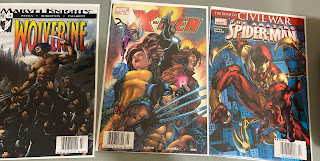 Lots of folks are aware how for many years there were comics sold in comic shops (direct market) and at newsstands, bookstores, and so forth (newsstand editions). The Rare Comics blog breaks them down pretty well. Newsstands used to not be especially rare but as the existence of...well, actual newsstands, faded, eventually, comics quit having the variation. One weird but interesting thing that occurred sometimes were rare (but not necessarily valuable) Marvel newsstands with a price difference. Back when comics would be $2.25 or $2.50 there were sometimes newsstands from Marvel between 2003-2006 that cost a bit more--$2.99. It happened on one really notable comic, "Amazing Spider-Man," #529, as well as plenty of random ones (it is the debut issue of the Iron Spider armor Peter Parker wore for a bit). It is such a footnote of a random occurrence only a handful of sites even mention it (here is The Rare Comics blog again with the only deep-dive I could find about this). Then during 2006, all the Marvel newsstand and direct market issues became $2.99.

I sometimes will buy small collections or find stuff in stores and recently happened to come across some newsstand cover price variants in different locations. I got, "Wolverine," and, "X-Men," ones as well as the aforementioned most notable of the cover price variant issues, "Amazing Spider-Man," #529. Again, these aren't worth a ton more than a regular issue, maybe like $10 each besides the Spidey book which in near-mint shape could pull $75 or so. My copy is a little worn and could fetch the $30 I paid for it on a good day as I didn't buy it to flip so much as I enjoy collecting a strange piece of history.

If you like odd bits of trivia the fact that some newsstands had a higher price is a fun little random thing to know. CGC doesn't even acknowledge regular newsstands in their grading and barely makes note of the cover price variant ones. CBCS does make note of newsstands but I'm unaware if they point out simply if a comic is a newsstand or do a special note for those that are a cover price variant--perhaps someone can comment to let me know! Now, I should start looking into the $3.99 cover price variants of newsstands that occurred too, I suppose. That's another story for a different day, however.