January 6th of a Year Ago 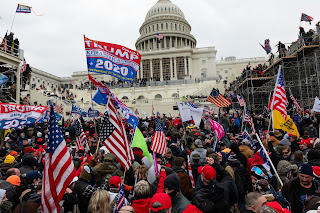 A year ago today I made a post that simply asked, "America, What the Hell?" I, of course, wasn't referring to all of America, but a certain demographic that refused to accept reality. I was talking about the people who were so blind to the truth that Trump lost the 2020 election they literally attempted a coup with the insurrection at our Nation's capital, the Capitol (I know, the spelling gets confusing depending on how you're saying it). A lot has been written about this awful day a year ago by myself and plenty of others. What astounds me--even though I shouldn't be surprised by anything at this point--is how many people try to act like what happened on January 6th, 2021 was not a big deal.

I see some individuals and media outlets attempting to claim a violent riot of treasonous fools did not happen--it was just some rowdy tourists or some equally bewildering absurd statements. I guess conservatives are embarrassed that their actual end goal happened in the same way Dr. Frankenstein kinda regretted what he did when his monster started murdering folks (although in the monster's defense it was not trying to hurt people, the MAGA-morons at the Capitol were clearly intentionally violent). 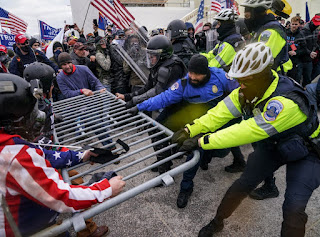 This day last year something terrible happened and trying to pretend an insurrection was no big deal because the people who did share some of your political beliefs is atrocious. I'm not a fan of people like Liz Cheney, but to her credit, she's called bullshit on many other members of her party who like to rewrite history as if they weren't barricading doorways and running in fear for their lives a year ago as the crowd threatened them and chanted such delightful phrases as, "Hang Mike Pence." A year ago today should be remembered as something infamous, terrible, and embarrassing. Let's not pretend otherwise.