Microsoft to Buy Actvision-Blizzard for a Bucket of Money 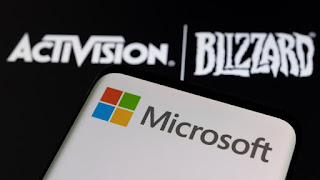 Remember last week when I talked about how Take-Two acquiring Zynga was a big deal in terms of video-game acquisitions? Well, now that pales to how Microsoft is going to buy Activision-Blizzard for $68.7 billion. That's a bucketful of money. Activision-Blizzard had been going through a ton of made-public struggles and apparently the fact it is a bit weakened prompted Microsoft to want to swoop in, buy it, and most likely kick beleaguered CEO Bobby Kotick to the curb. Sony takes a hit here, with Microsoft's buying spree really giving it more power in its effort to create a, "Netflix/Metaverse/whatever," of games.

With this acquisition, the largest gaming company is still China-based Tencent, then Sony, and now Microsoft in third. All these mergers and acquisitions make me think the big dogs are going to keep gobbling-up smaller properties and I do wonder what Sony may do in response. Looking at all this I just simply think, "Trouble brewing," and how much trouble will remain to be seen.