"Land of the Living Gods," #1 is a Fantastic Debut Issue 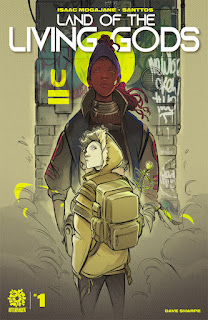 "Land of the Living Gods," is a new comic being published by Aftershock. It is written by Issac Mogajane and illustrated by Santtos. It takes place in the far future as Earth is basically dying and a young woman named Naledi struggles to keep herself safe and alive (along with her mysterious pet plant, Buyo). Naledi lives in South Africa and Mogajane brings his own heritage into the comic, pulling from various African cultures, traditions, and phrases. The future we witness is one with some advanced technology but also ghostly spirits and old traditions that blend together in the narrative. It's a mix of old and new.

We get a lot of world-building in this first issue, and what a World it is! Mogajane gives us characters that feel alive and three-dimensional with Santtos' artwork working to give us a gorgeously ruined World. Sand and decay is everywhere with little hints of energy and life. Also, Naledi has albinism (which becomes important as the first issue reaches some conflicts) and her bright white skin stands out amongst the shadowy ruins in an eye-catching manner so props to Santtos for some expert work drawing and being the colorist for the comic. 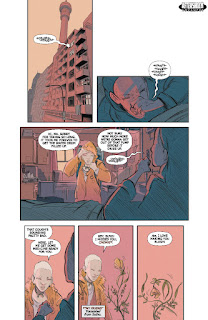 "Land of the Living Gods," puts a fresh spin on the dystopic future tale and succeeds greatly at it. I really enjoyed this first issue and look forward to upcoming ones. I was able to get an advance digital copy for the purpose of review and would encourage everyone to seek out this debut issue when it hits shops tomorrow, 2/2/22.