Conventions Coming in the Next Three Months I Am Excited About

From February through April there are a number of fun conventions coming up. I am excited for a number of them and thought I'd give each a spotlight. I hope to attend all of these conventions and would encourage you to check out their pages and make plans to go yourself if you'd be able to do so! Now then, in chronological order...

Missouricon, February 12th
I mentioned back in January how I was pumped for the first-ever Missouricon. It is going to be held at the Holiday Inn Downtown (in the city region of Saint Louis) from 10:00 AM-5:00 PM and features a number of fun guests, cosplay contests, plenty of vendors, and a big, "Super Smash Brothers," tournament at this big pop-culture event! I'm excited to attend this con's debut! 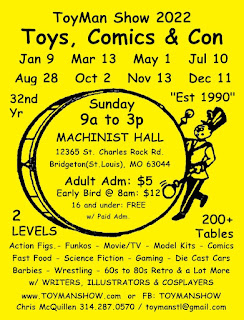 ToyMan Show, March 13th
Every single time I go to a ToyMan show I know two things are going to happen. First, I'm going to have fun. Second, I'm going to find some awesome comics/toys/other neat stuff. Always held at the Machinist Hall (12356 Saint Charles Rock Road in Bridgeton) from 9AM-3PM with 8AM early bird entry, ToyMan is always a hoot. 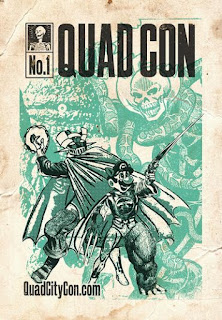 St. Charles Quad Con, March 27th
I really enjoyed the Quad Con when I went for the first time to the October show. Therefore, I am ecstatic about the one in late March! Held at Olympia Events Center at 49 Lawrence Street in Saint Charles, the show likes to declare it is, "25% toys, 25% games, 25% comics, 25% cosplay, 100% fun!" I eagerly look forward to meeting more awesome people at this show and, of course, getting some good comics. 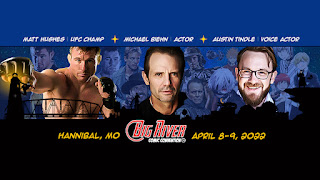 Big River Comic Convention, April 8th and 9th
An amazing convention held a little under two hours away from Saint Louis in Hannibal, Missouri, the Big River Comic Convention will be celebrating its third show this year! The previous two events were superb fun and this year has some pretty impressive guests in the form of such folks as Matt Hughes, Michael Biehn, Austin Tindle, and plenty of superb vendors and creators! Held at the Tabernacle of Praise Recreational Complex (6400 Co. Rd in Hannibal), I need to double-check the times for each day, as the show nears I'll surely post about it some more!
Posted by David Charles Bitterbaum at 6:12 PM