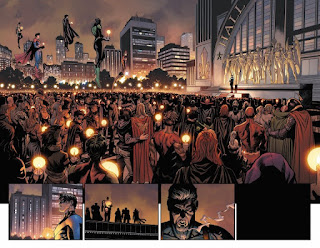 DC has announced a new event known as, "Dark Crisis." It will begin with a Free Comic Book Day #0 issue, then a Justice League comic comes out in late May titled, "Justice League: Road to Dark Crisis," which takes place after the regular series has #75, which apparently kills a bunch of them. At that point, "Dark Crissi," begins properly with #1 in June. It is a tad confusing, kind of like how, "Secret Empire," has a first issue that wasn't really a first issue (this will hopefully be better than that event, however). Joshua Williamson will be writing, "Dark Crisis," and Daniel Sampere is doing the art on at least the zero issue. As for what the event is about, it is the usual, "Multiverses will die!" type stuff. We get a, "New generation of heroes," and it all sounds suitably epic as events generally tend to be.

DC has had a number of events--many with, "Crisis," in the title. Some have been great, some have been awful. Bleeding Cool has noted all the interesting little pieces that might be involved in, "Dark Crisis," and I now know better than to predict if an event will be good or bad ("Fear Itself," sucking and, "Flashpoint," being a treat illustrated that). All I can say is, "Dark Crisis," sounds like an interesting tale with its question of what happens when the Justice League is gone but a new crisis arises. Plus, at least it isn't being advertised as yet another reboot of the Universe! I'll check out the FCBD issue at least because--obviously--it is free!