"Justice Warriors," Looks Like a Wild Piece of Satire 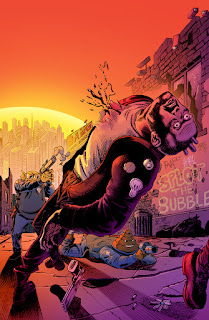 I noted back in April of 2021 that I was saddened by (but understanding of) how Matt Bors was retiring from his weekly political cartooning work. I was excited to hear, however, that he and filmmaker & illustrator Ben Clarkson are teaming up for a satirical comic titled, "Justice Warriors." It'll be published by Ahoy, a slightly newer publisher who put out a ton of great reads. "Justice Warriors," has a press release that goes as such...

"Justice Warriors," follows two police officers, Swamp Cop and Schitt, stationed in the world's first perfect city. A bustling metropolis flourishes inside the protective shell of Bubble City. It is a city of equality, diversity, and prosperity with no crime whatsoever. But outside of the Bubble lies the Uninhabited Zone, a densely populated and vast slum where the majority of the mutant population actually lives.

In the series, the veteran Swamp Cop is paired with a rookie partner, Schitt, after Swamp’s partner is killed in the line of duty (when he was run over by a self-driving city bus). The increasingly cynical Swamp Cop becomes obsessed with arresting or killing the bus, as he begins to suffer PTSD. Haunted by hallucinations of his dead partner, Swamp Cop is determined to show the naive rookie Schitt that you can only police the UZ by bending every rule that’s left.

Each issue, Swamp and Schitt must contend with new forms of crime as the Bubble’s boom-and-bust economy creates waves of market panic, bailouts, and austerity. Amid the instability, a new cyberpunk gang rises to prominence using social media, good vibes, and anti-Bubble sentiment to wage war on the Prince, the mayor who is also a pop star.

It sounds utterly wild and I look forward to reading what is sure to be quite a clever & funny comic!