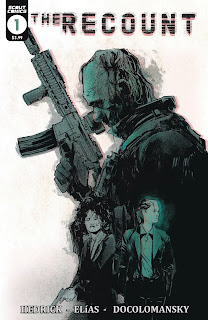 Reading the first issue of, "The Recount," from SCOUT Comics is like looking in a funhouse mirror of our country currently. You can see the bits of reality, but you can tell where things get warped just a little wrong too. The scary part is if you squint really hard it all looks so uncomfortably possible too. Writer Jonathan Hedrick brings us the tale of an America that is horrifically divided and partisan. It gets to a point where an apparently domestic terrorist group infiltrates numerous parts of society, kills the President with the assistance of a Secret Service sleeper agent, and now the Vice President has to try to keep the country in order while this terrorist group attempts to start an all-out Civil War.

The fictional President doesn't resemble anyone currently in office and the new Madame President (once she ascends to the role) also is clearly fictional. Still, that funhouse mirror metaphor stands as if you squint hard enough a lot of this comic feels uncomfortably possible. After all,  we have domestic terrorists wanting to kidnap governors, we have people brawling in the street over their refusal to wear a facemask because the President says its a sign of weakness--everything is a mess. "The Recount," peers into the abyss of what our country currently is going through and asks what would happen if we pushed it just a tiny bit further. That makes it both a fascinating and terrifying read of a comic. 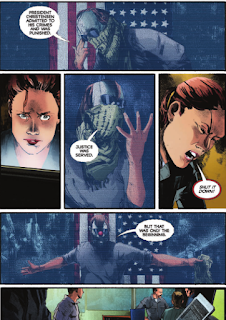 The art by Gabriel Ibarra Nunez is solid, imparting ample menace when we see shadowy figures in surreal costumes to disguise their identities delivering televised threats. It is a little minimalist, but the focus is always clear and it's scratchy and discomforting style fits the tone of the story perfectly. This clearly isn't an optimistic tale we're reading, after all.

The first issue of, "The Recount," is due to arrive at comic shops on November 11th--a week and one day after our upcoming election. Whether the election is even decided when it arrives and if our nation is relatively calm or pulling itself apart even more will remain to be seen. The unnerving topicality makes this a gripping read I'd recommend to anyone willing to peer into a slightly twisted (but still disturbingly recognizable) image of our nation, however.

A digital copy of, "The Recount," was provided via a press newsletter from SCOUT.

Posted by David Charles Bitterbaum at 9:53 AM