A Surprise Guest Crashed the VP Debate and it Was Amazing 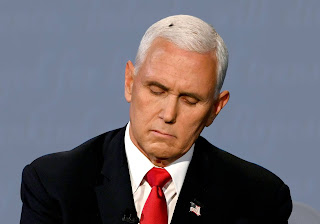 The Vice Presidential debate last night was a relatively mellow affair. Compared to the mess of screaming that was the first Presidential debate, this was a pretty chill-but-tense event. That is, except for the full minute and a half-ish that a fly landed on Mike Pence's head and just...stayed there. Pence maybe didn't feel it, who knows, but it just sat there and sat there while he and Kamala Harris spoke. Fly's love things that are rotten, and nothing is more rotten than Trump's Presidency which Pence has happily been a part of, so the fly is a fitting metaphor. The whole thing was surreal and everyone has made plenty of jokes about it online, including Biden's own campaign. Who knew a little bug could have so much impact?