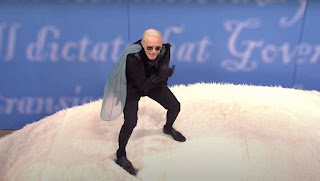 "Saturday Night Live," returned last week with Chris Rock hosting and was perfectly fine, it usual decent-but-somewhat-toothless self. Last night, however, actually had some edge and at other points just got enjoyably weird. The show opened with what seemed to be a usual debate spoof with the always-welcome-back Maya Rudolph playing Kamala Harris and Beck Bennet portraying Mike Pence. It was fine, but took a weird swerve when Jim Carrey's Joe Biden tried to teleport to the debate and morphed into a fly that also talked like Jeff Goldblum (because, you know, he was the Fly before). Also, a reincarnated Herman Cain (played by Kenan Thompson) appeared as a fly and it was so bizarre that the internet mostly hated it but I admired the surreal direction SNL went.

From there we had host Bill Burr come out and true to his stand-up roots do a set that pushed boundaries. It started out a bit wobbly talking about, "Woke," culture with a, "I'm a white guy, what is this?" kind of vibe, but took a delicious swerve when Burr discussed White women essentially taking over Woke culture and ignoring how complicit they have been in much of the discrimination and persecution of minorities over the years--e.g. "White Feminism." Twitter erupted with many White women calling for Burr's head but also a number of my friends and other random folk saying, "Well, he isn't wrong." 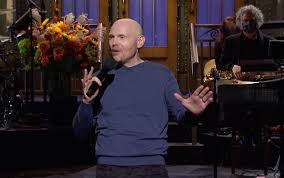 Burr's monologue/set closed a bit weakly with riffs on gay pride month being in a warm and fun month and Black history month being in a cold and short month, but the audible discomfort and nervous laughter in the audience was a refreshing change of pace for an SNL that often plays it safe. Everyone'ss response was mixed to Burr's monologue, but I thought it did what it set out to do.

It wasn't just the host bringing some pointed barbs, however. Weekend Update was refreshingly on point, with Michael Che outright expressing some minor disappointment that Trump is doing okay with his COVID-19 infection, comparing it to a horrific car accident where only the drunk driver lived. There was a sweet moment too with Kate McKinnon doing a bit as a smart doctor that was bombing before it took a swerve into her, "Breaking," character and discussing how with us not knowing so much about what the future holds she just wanted to be a character who did know something. This was of course a fully scripted moment and nobody actually, "Broke," as some websites are framing it, but it still worked wonderfully. Pete Davidson closed things out doing what he does best on SNL--playing himself just sharing comedic thoughts, and he pointed out the irony of how J.K. Rowling created a magical world where exotic mystical beings get along yet she has revealed herself to be a huge transphobe. 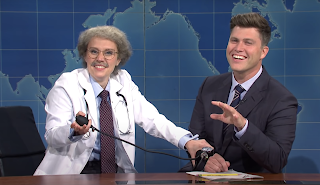 Besides the opening, Burr's monologue, and a solid Weekend Update the show didn't really have any stinkers of sketches. There was a fun segment about a couple going stir-crazy form COVID-19, a sports segment that goes off the rails as one commentator misreads the usual room's mood, and a mafia sketch that dragged a little bit with a mobster out of prison after 20 years struggling to adjust to new societal norms, but it still had its charms. Oh, and because some random newer country singer (named Morgan Wallen, methinks) partied some days before his SNL gig they canceled him for now and instead called-up Jack White who was more than happy to fill-in and absolutely rock the place. His mic was bit weak, making vocals hard to hear, but that man can play the guitar. I think SNL traded-up replacing Wallen with White, but that's just me.

All-in-all we had an episode of SNL yesterday that had some decent meat on the bone in terms of content. I love the show but will readily admit it sometimes can be a bit too eager to fall-back on predictable bits or reliable and easy segments like faux gameshows. The Bill Burr-hosted episode wasn't perfect, but Burr was willing to take some risks and the show did it with him too. I'll always take an edgy and weird SNL episode over a blandly entertaining one.