"Analog Nightmares," is the Best Book about SOV Horror You'll Ever Read 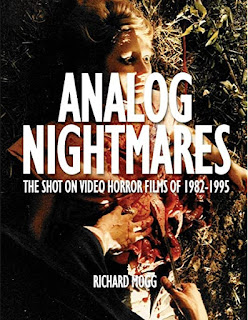 SOV stands for, "Shot on video." It is a term used for when in the 1980s moviemakers started realizing they could make movies on tape instead of film to save money. It made stuff look cheaper, yes, but with much of television on tape, it wasn't too big a deal. This opened the doors to many wild and bizarre SOV movies, with the horror genre especially benefitting. Despite about two decades worth of history to be found in these marvelous low-budget wonders, there ain't much written about SOV horror. A recent-ish book by Bleeding Skull about weird 1980's horror flicks touched upon things, yes, but we needed someone dedicated to make a veritable encyclopedia of SOV horror. Well, Richard Mogg created a 400+ page tome of SOV horror from 1982-1995 and he named it, "Analog Nightmares." It is a sight to behold.

"Analog Nightmares," is a large book. Not just in page count, this thing is tall and wide. I am thankful for this, as it allows Mogg to cram a ton of stills from movies, images of posters, advertising, and astounding behind-the-scene snapshots. Mogg doesn't present everything in a sterile way you'd expect from an encyclopedia-styled book either, he reviews what he personally liked in the many movies, what he didn't like, if he was unable to watch a handful, and his love for cinema--and horror flicks especially--is quite clear. That Mogg himself has made some flicks is no surprise as this man seems to live and breathe movies. 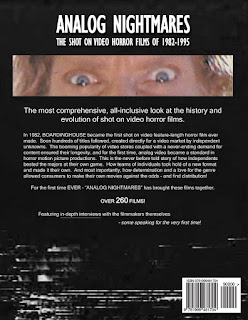 Between chapters that break-down every SOV horror film from a year that Mogg knows of he offers insight into the film and video rental industry at that time, interviews a wide range of directors, actors/actresses, and otherwise provides more detailed knowledge of SOV horror than you'll find anywhere else. Seriously, Mogg has probably casually forgotten more about SOV horror than 99% of us know. I also appreciate that Mogg comes at these at times hokey and low-budget features with a measure of appreciation and love, trying to find something to like in even the most miserable SOV production. While other books that touched upon SOV horror a bit-such as the aforementioned Bleeding Skull book--at times are a bit prone to mock how messy and wonky SOV horror could be, Mogg has an abiding appreciation for it all that is readily apparent in his writing.

"Analog Nightmares," was a delight to read and I recommend to anyone interesting in movies, horror, or exploring weird sub-categories such as the realm of SOV horror. As Mogg observes about our present time, now that we all have phones with cameras and can make movies with ease it isn't necessarily that era of DIY movie-making is gone, if anything it has only grown and become even wilder. That makes this look to the past in some ways an interesting glimpse at what the future of filmmaking is like today with more and more people setting out with little (or no) money and making their own backyard epics. The present is indeed a wild time, but reading about the past in Mogg's extensively detailed book was a pleasure.

Posted by David Charles Bitterbaum at 10:12 AM