"Carrion," is a Delightful Monster Game With You as the Monster 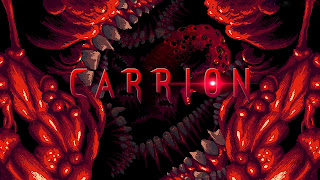 In many games, you play a protagonist going into a lab or such after a monster has escaped and wreaked havoc. Imagine a game where you were the monster, however. In, "Carrion," you get to be a ball of meat, teeth, and blood that flings itself around a secret base in the hopes of eventually escaping. There isn't too much plot besides some mysterious flashbacks, and that's okay. You're a monster, you eat people, and you do it with gusto--that's about all you need. I played, "Carriron," on my Nintendo Switch and I had lots of fun doing this eating.

As the unnamed creature in, "Carrion," you look a bit like John Carpenter's version of, "The Thing," and will need to use various abilities to at times sneak around and at other points brute-force your way through assorted threats and occasional environmental puzzles. I stink at complicated puzzles and nothing really stumped me, so that shows things are not too difficult, thankfully. Generally, you just need to get through an area using your abilities in clever ways. Sometimes you'll need to be invisible, other times you'll need to grow some sharp skin. The pixel-style graphics have a nice retro feel while still holding a modern sheen with some gorgeous effects such as how fluidly the monster (generally) moves or the gorgeous way fire from the humans' flamethrowers erupts. You almost want to stare at it, but doing so instead of seeking out some water to cool-off will result in you dying and going back to the last checkpoint. 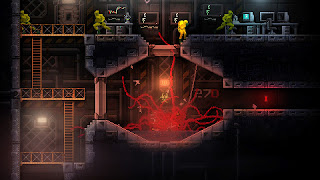 Carrion isn't perfect. As your monster grows larger sometimes movement can feel a bit janky. A small monster moves with grace and ease, a big one kind of flops around and gets stuck in the game's tighter corners. Also, there are some points where you'll be back in the staging-area of sorts and not be exactly sure where you'll need to go--resulting in some trial and error. You'll realize you're back in the hub-area with some new skills and then kind of just muddle around until you realize where the next zone you need to stop by is. A map or optional objective-pointer would be appreciated.

Minor qualms aside, "Carrion," is great fun and a fantastic way to spend 5-8 hours depending on how quickly you breeze through it and if you look for extra hidden items/containment units. Between the great graphics and fun gameplay, I had a stellar time.