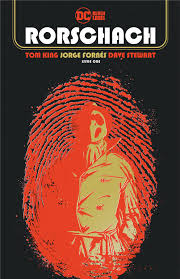 A sequel series to, "Watchmen," is a dangerous thing to make. The television show pulled it off, but could a comic focusing-in on Rorschach work? The new Black Label series written by Tom King with art by Jorge Fornes in addition to colors by Dave Stewart is here and the answer is...maybe? This first issue has received glowing reviews, good reviews, okay reviews, and absolutely terrible reviews, so opinions are all over the map. One thing everyone agrees on is that Fornes and Stewart provide some amazing art and colors, that ain't up for debate. The art interestingly is not in the style of, "Watchmen," and its nine-panel grid, with it breaking free of that format giving everything a different kind of tone already. Even though the comic takes place in an alternate 2020 there is a strong 70's thriller movie vibe to it between the outfits, hairstyles, and again, general vibe. That's the art and colors, however. Why is the writing causing so much division?

"Rorschach," presents a mystery. A right-wing Presidential candidate has been targeted by an extremist leftist who wanted to kill him and that would-be assassin was dressed as Rorschach of all people. This is odd as Rorschach was known for being a quite right-wing objectivist who died years ago and became a symbol of sorts for those beliefs. This point leads to the first reason some reviews are mad--an extremist leftist? Really? You don't see those on the far-left usually trying to kill political candidates. You see right-wing domestic terrorists planning to kidnap governors or shooting-up peaceful protests, but I guess in the, "Watchmen,"-verse things are different. This, "Both sides have bad apples," kind of look has irritated a chunk of reviewers, however. Another reason some folk are upset at, "Rorschach," is because it exists in the first place against Alan Moore's wishes. Moore of course was supposed to get the rights to, "Watchmen," and all its characters, etc. back once the book was out of print. It became a huge hit and DC screwed him over, however. That alone makes some ready to come at the book with knives drawn.

Putting aside some troubling political messaging and how the book existing is a slap in Alan Moore's face, I didn't hate it. The majority of the plot is spent introducing the mystery of the assassin and his female accomplice with any main characters (like a lead detective) being vaguely sketched-out with more character development to come later, I suppose. Again, this comic is gorgeous to look at, but as of right now there isn't much plot to speak of besides, "Who is this assassin, and how or why does he relate to the original Rorschach?" I didn't hate this comic, but it failed to do much for me either. This is itself a bit shocking as Tom King either usually is utterly amazing or absolutely terrible. I'm hopeful that with the basic groundwork laid for this mystery things will get in gear a bit more and if that does happen this could be a pretty snazzy read. As it is now though, it is a beautiful comic with a hopefully-not-pedestrian-for-too-much-longer story.