Superman Revealing His Identity Again Seems Like Such Lazy Writing 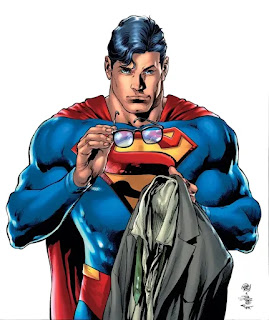 I am a fan of the comic writer known as Brian Michael Bendis. I am realistic tho, loving some of his work and admittedly thinking parts of it are not as good (his team-books oftentimes were lackluster compared to titles focused on a singular hero). Some time ago he went to work for DC Comics after years at Marvel and his big thing right now is having Superman reveal his identity as Clark Kent...which yes, happened like a couple years ago when Lois Lane spilled the beans.

This seems so lazy because as I said, it happened some years ago and nobody really cared, so why are we treading the same/really similar ground? I would argue the fact Clark Kent and Superman are the same person is the least interesting thing about both identities, the whole point is that Superman represents goodness and doing the best you can while Clark Kent is a way for Superman to live a normal and human life...so by revealing they are the one person that erases the point of Clark Kent, arguably. Heck, having Clark Kent as an identity helps humanize Superman as well, keeping him grounded despite being so almighty--there is a big monologue in, "Kill Bill: Volume 2," about this actually:

Bendis does not seem to care about any of the reasons I and the late David Carradine list as the upcoming, "Superman," #18 will apparently have the big reveal (unless this is all some clever trick to hide a more wild twist, in which case that would be pretty impressive). I have not seen any excitement about this, just people shrugging and thinking this is a redundant idea from Bendis at best or, "Chasing headlines," at worst, as my friend Agent Poyo at Comics Heating Up describes it. Perhaps this will be a great story somehow, for now I'm not that enthusiastic.
Posted by David Charles Bitterbaum at 7:46 PM