It is 2019 and Chicken Sandwiches Are Political 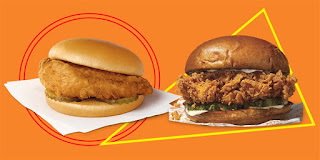 It is the year 2019, and chicken sandwiches are political. People who enjoy Popeye's chicken sandwich find it loaded with complex socio-political discussions about how some are engaging in Black shaming with it, saying racist things about Black people liking the sandwich and that they, "Should line-up to vote," which is hurtful and stupid because nobody said all the white folk lining-up for Pumpkin Spice Lattes needed to do the same thing--so yeah, some racism in there. Plus, liking fried chicken has never been a race thing.

White people love fried chicken, Black people love fried chicken, Asians love fried chicken, vegetarians love fried chicken so much there are vegetarians who make exceptions for eating chicken because it tastes so great. So yes, all races and demographics love fried chicken, making it a weird race thing is stupid when we should all join greasy-hands across the World regardless of race, belief-system, gender, etc. and sing the praises of fried chicken. Oh, but wait, belief systems are important for fried chicken too? Yep.
That's right, apparently now if you're more liberal and progressive you should eat at Popeye's if you desire a chicken sandwich because Chick-Fil-A and their chicken sandwiches have a political and religious history that is...troublesome at best. There has always been a social, religious, and political element to food (from stereotypes of certain cultures eating certain things to religious objections to some kinds of foods), but in 2019 subtlety is dead and we're just now outright screaming at each other about chicken sandwiches being racist, being homophobic, and thinking the act of driving-through a particular establishment is making a huge statement...which it kind of is, I guess? It seems the only thing everyone can agree on is that the Spicy BBQ Chicken Sandwich from McDonald's is utterly forgettable, so I guess we've got some unity on one thing.
Posted by David Charles Bitterbaum at 7:04 PM