I Feel a Mixture of Joy (For the Show) and Dread (Due to Some of the Fanbase) as, "Rick and Morty," Returns for Season 4 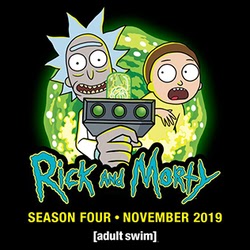 It has been a good year-and-a-half since there has been a new episode of the television show, "Rick and Morty." Tonight it returns to Cartoon Network's Adult Swim programming block at 11:30 PM Eastern, 10:30 PM Central. This new season will be 10 episodes and it is going to start-off with five straight weeks (I think) of the show and then there will be a break before the season finishes-out its second half in early 2020 or so, I imagine, with the show returning after the winter holidays. I am both excited and honestly dreading this a bit because while I personally love the show, it has a fan-base that can be pretty toxic.

Don't get me wrong, I have met some wonderful men and women via my love of, "Rick and Morty," who have as big a fondness for the show as me while also not totally misinterpreting the show as if Rick is someone to look up to as opposed to pity. I know lots of folk who love this show and don't threaten to throw a riot if a loosely-tied-in-to-the-show dipping sauce happens to run-out at McDonald's restaurants. Sadly, however, the internet and everyday life is full of people who are unpleasant and either act like they are the only people who, "Get it," in regards to the show or who otherwise are just big jerks towards everyone else because some fandoms just can sadly develop a nasty-but-loud contingent who try their hardest to poison the entire fandom with their venom (look at the newer, "Star Wars," movies for a good example of this). 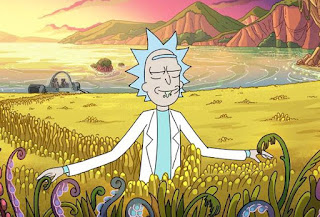 I really do love, "Rick and Morty," and am eager to watch it. I just am not that pumped to witness some people insult and otherwise be mean towards others because they think they get to be gatekeepers of the fandom for, "Rick and Morty." The show's creators have outright disowned the haters, so hopefully they'll just shut-up and let the 99% of people who are kind and pleasant enjoy our time sitting down and going on some weird and often-dangerous adventures with Rick, Morty, and the rest of the family. Yes, even the eternal loser, Jerry.
Posted by David Charles Bitterbaum at 4:52 PM