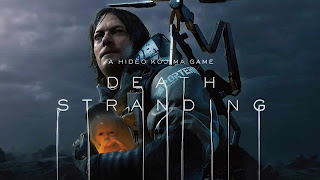 Hey, ya'll know that, "Death Stranding," game that's been getting a chunk of hype? Well, the reviews are starting to be posted and it is apparently really weird and interesting, maybe good. Some reviews are glowing, some are vaguely intrigued, some find the whole thing humdrum even if it looks really good and has some-off-the-wall ideas because at the end of day the game is mainly a bunch of walking around for fetch-quests (with big fancy cut-scenes thrown in too). Hideo Kojima founded his own studio, hired a bunch of people, got some famous friends, and made his game. Whether it becomes a huge hit or ends up falling-flat on its face will be seen when it is released November 8th, 2019.

"Death Stranding," is clearly good-looking, very odd, and has whole lot of ideas. We shall see if it is also fun or a success. I know I at least want to give it a try on my PS4 at some point, if for no other reason than I enjoy zany stuff, generally.
Posted by David Charles Bitterbaum at 9:35 PM