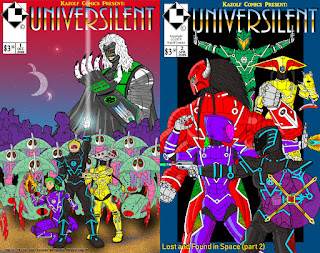 In a previous post where I discussed my time at the most recent Toyman show I mentioned having met and purchased comics from Kevin Kessler of Kazolf Comics. Titled, "Universilent," the series takes place in the far-future where sound has been erased from Earth and a number of the main characters are deaf. Mr. Kessler is himself deaf and came-up with this idea for his series of a World with no sound, "Just as Kevin's World is," as his comic's biographical-section discusses. I bought the first and second issue of, 'Universilent," and greatly enjoyed reading them.

The two issues focus on a squad from the future-version of Earth (now called Eyeth) as they inspect a possible danger on another planet. The second issue reveals this threat in full after hinting about its powers. Kessler illustrates the dialogue in the creative way of drawing the character's hand-gestures as they communicate via sign language which we then read as traditional comic speech bubbles. Kessler also creates a wide-range of cool-looking futuristic robots and aliens that are delightfully strange and imposing. Were I to have any criticism it is that there is a lot of text in the first issue as a bit of an, "Info-dump," to fill readers in on this future-Universe, but by the second issue with the background established the comic is able to focus on what it excels at--neat robots, strange aliens, and wild space-battling action. 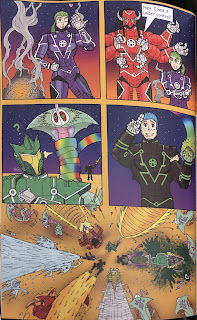 "Universilent" is only two issues in so where exactly the plot may be heading is unclear, but I'm excited to see what happens next. I encourage you to visit the website for, 'Universilent," where you can buy the first two issues for yourself and check the series out--I know I'm eager for issue #3!
4.5 out of 5 stars (for both issues).
Posted by David Charles Bitterbaum at 11:02 PM