Chelsea Cain is a writer who has done some stuff I really liked. Her cancelled-too-soon run on, "Mockingbird," was spectacular, with Kate Niemczyk doing a stellar job as well illustrating it. They reunited to do, "Man-Eaters," which takes place in a world where menstruating women can turn into violent panthers and kill people, resulting in all kinds of legislation and efforts to control their bodies. I was super-impressed with the artwork, but the story was just kind of..there. Cain seemed to have a clever idea but was engaging in some strange metaphor mixing, doing the White-Feminism thing of incorporating racial imagery and such while having all the characters in the story be White (e.g. a women-only fountain calling-up ideas of racial inequality...but all the women are Caucasian).

One thing that didn't occur to me was how the story seemed to be ignoring the idea of the manner in which Trans individuals might be affected in such a world. This was pointed out by some people who felt the story could benefit from the inclusion of Transmen and Transwomen simply to expand the plot and provide more of a view than how the story seemed really focused on CisWomen who were white. Cain saw some tweets written about this and responded in a somewhat overly-defensive manner about how she appreciated Trans readers even if they, "Hate," her book (no one Trans said they hated it, just that it could incorporate Trans people into the story). She said she would work to be better, so no harm, no foul, right? I mean, sometimes Cis-folk don't think about how Trans characters could be affected by a plot in a story but by working to be more inclusive we can correct that. Cain apologized so all was good...and then she did something really stupid. 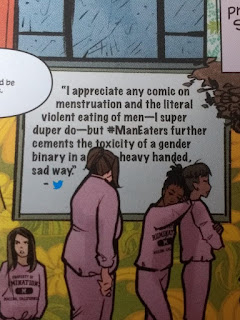 In issue #9 of, "Man-Eaters," Chelsea Cain has a bunch of her white female characters in a concentration camp for women (more uncomfortable metaphor-mixing) and there are billboards in the background that copy text verbatim from Twitter with tweets critical of, "Man-Eaters." This includes Trans readers who tweeted about the comic. Cain basically is passive-aggressively responding to critics by making them look like dumb haters. She didn't include user-names, but it is easy to find Tweets with the text and it maybe was actually illegal to take other's tweets and print them in her comic without any permission. The internet exploded in response to this. It has been pointed out that at this point Cain has a lot of things we can question in regards to if she is in fact trying to do better or is moreso engaging in classic White-Feminism that exclusively focuses on White, CisWomen to the hindrance of anyone else (people of color, Trans individuals, and so forth).

I'm not saying Chelsea Cain is a TERF, but she's making some dumb moves. Before she deleted her Twitter in response to all this hubbub she asked if someone Trans would work for her for free to ensure the book was, "Sensitive," enough to Trans concerns, and then just outright stated, "'Man-Eaters,' has meant a lot to a small group of people, and we will finish the last three issues for them. I'm sorry I'm not who you want me to be, and I'm sorry that ME can't be inclusive of every experience." Much controversy could have been avoided if Cain has simply apologized and continued her story how she wanted or tweaked it to be more inclusive, if she had done either without printing tweets in her comic without permission. She messed-up when she did that, and she continued to really mess-up afterwards tweeting some ignorant B.S.
The whole thing is a mess, and the icing on the cake is some Conservative idiots are now on some of the sites I frequent laughing about how this is an example of Liberals turning on Liberals and how left-wing people are the really hateful individuals, etc. These morons of course miss the point, but its just annoying to see right-wing dummies yukking it up about all this. At this point I don't know what Cain is going to do, but it seems the comic will conclude and maybe future printings of the series will excise those unfairly-printed tweets. What a fiasco.
Posted by David Charles Bitterbaum at 10:15 PM