DC Comics Just Took a Humanitarian Stand and I Applaud That 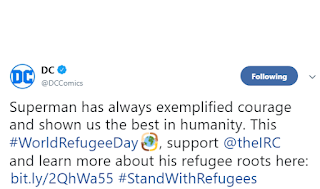 Currently at America's Southern border things are an absolute mess. Migrants are being kept in cages within concentration camps (and yes, they fit the definition of concentration camps), and our Country seems gripped with a violent xenophobia not seen for decades. There are certain elements that are very obviously to blame (Trump, the GOP, etc.), but things continue to just get worse instead of better with so few politicians willing to speak-out no matter how many people they represent urge them to do so. Big corporations at times have taken stands on issues (Nike and its deal with Colin Kaepernick who was blacklisted from the NFL for his protesting police brutality), but usually this only occurs when the company crunches the numbers and sees they can make more money supporting one issue as opposed to another. DC made a statement today though that seems less motivated by finances and more by general humanity.

DC Comics tweeted about the need to support refugees and stand with migrants. They deleted the Tweet but then put it back up an hour later and now it still stands. This is sure to piss-off a bunch of angry xenophobes who seem to forget that Superman himself is literally an alien refugee, sent to Earth and landing in America by parents who wanted him to have a change at life (e.g. not dying on Krypton), but at this point saying you are in favor of migrant concentration camps just makes you look like  heartless monster, so obviously DC is doing the right thing here. Even if it gets them some angry press, some right-wing readers saying they'll never read DC books again, and so forth, this is the caring and human choice to show support for those who need it. DC took a stand on this humanitarian issue (it isn't political, it is treating people as human beings) and I applaud them for doing so.
Posted by David Charles Bitterbaum at 1:43 PM