My Favorite, "Assassin's Creed," Game is Getting More Respect Now 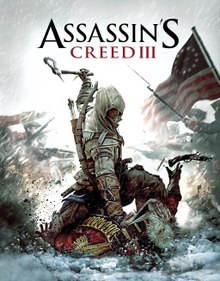 I've played a solid chunk of the, "Assassin's Creed," video-games, although not really any of the newer ones. With that said, my absolute favorite of the series is one that for a good long while many people scoffed at. Yes, "Assassin's Creed III/3." I adored many of the aspects people hated, from the extended intro with a character who turns out to be evil, to the tree-limb parkour, and my wife (who watched me play) and I even were big fans of the main character, Connor. Seriously, anyone who claims he was difficult to like clearly did not play the big, "Homestead," side-quests that really flesh his character out. As an article from Kotaku I finally made time to read discusses, now that some time has passed certain aspects of the game have really aged well, especially the political discourse.

"ACIII/3," originally came out in October of 2012. Obama was about to re-elected to a second term against his opponent Mitt Romney whom everyone had basically agreed at that point was doomed to lose. The World was an optimistic place. A game about the birth of America and how a lot of people were screwed-over by ideologues just seemed so pessimistic. Now it is 2019 and our political landscape has turned into a dumpster fire with President Trump eagerly pouring gasoline on it any chance he gets. The idea of a game calling-out the deeply-ingrained prejudices in our country with a half-White-and-British and half-Native American protagonist sounds extremely topical.

From its very inception the vow of our Nation being a land of equal opportunity for all has been a hollow promise if you aren't a White Male Christian. Perhaps some of the game-play was wonky (so, so many map-icons to explore with a good chunk being extremely buggy)) and the game took awhile to get the main story content. It still was an extremely fun and insightful, "Assassin's Creed," even if, "ACIV/4," of course gets a lot of positive press for the fun ship-sailing (which some people forget actually was introduced in this game too)! Yes, this was my favorite game in the series, I guess it just took a bit over half a decade for it to become even more relevant.
Posted by David Charles Bitterbaum at 6:32 PM