Back in February of 2016 the Kickstarter campaign for special editions of the new Avatar Press anthology series, "Cinema Purgatorio," wrapped. Featuring an impressive lists of contributors including none other than Alan Moore and Kevin O'Neill with a movie-themed short-story each issue as well as other folk, it sounded cool. There was Kireon Gillen and Ignacio Calero with a video-game themed piece called, "Modded," Garth Ennis and Raulo Caceres following-up on a short two issue mini they had done that shifted into the anthology, "Code Pru," about an EMT for monstrous creatures living among humans (but just trying to have a normal life). Christos Gage and Gabriel Andrade had one about Kaiju being trained by humans called, "The Vast!" and Max Brooks and Michael DiPascale had a weird take on the Civil War where instead of Americans fighting each other they were in a fight against giant ants--it was titled, "A More Perfect Union." The Kickstarter was a big success and the comic started coming-out on a good schedule. Then it got kinda delayed and mostly forgotten.

In May of 2019 the last issue of, "Cinema Purgatorio," was released to little fanfare beyond Bleeding Cool (who is owned by Avatar Press, natch) mentioning it. It had been oft-delayed and weirdly enough accidentally reprinted one entry of, "The Vast!" but as it never needed a catch-up piece some theorized it was meant to be shorter than the other stories and/or was horribly delayed and the title holding-up the series coming out at a decent schedule. The end of the stories in, "Cinema Purgatorio," indicate some of them will be continuing in some form--"Code Pru," "The Vast!" and, "A More Perfect Union," seem to plan on follow-up comics or graphic novels (one would assume within Avatar Press). I liked, "Cinema Purgatorio," but other than some buzz when it first began thanks to one of the stories featuring Moore and O'Neill working together (they are of course both well-known creators individually and folk love their, "League of Extraordinary Gentleman," work) there was usually little discussion of the title anywhere. 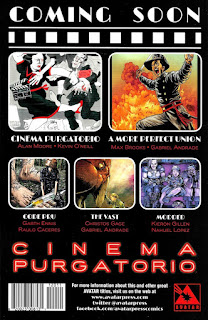 All of the stories within, "Cinema Purgatorio," were quite solid and equally good--a rare thing to say about an anthology series where many times you get some gold and some garbage. I'd for sure be interested in reading any follow-up comics with the stories that indicated more is to come, but wonder if the relatively muted reception to anthology series will result in the individual creators or Avatar Press deeming the stories not worth following-up further on. That would be a shame because, as I said, it was a solidly entertaining book (at least when it was able to actually come-out). I really liked, "Cinema Purgatorio," but it seemed a lot of folk just kind-of shrugged about it. It's a shame, but that's how things go sometimes.
Posted by David Charles Bitterbaum at 7:12 PM