Flashback Friday: "The Bat Brothers," Comic I Made When I Was Five Years-Old 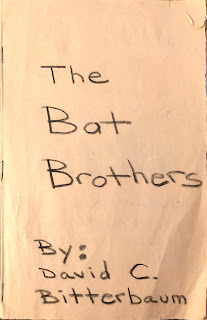 I have drafted a comic-book idea here-or-there and am a mediocre artist but enjoy doodling. However, in 1994, back when I was five years-old I created the only comic that to this day I wrote, illustrated, and provided colors for (my Mother did hand-lettering, now a lost art in this era of digital comic lettering). I may have been only a half decade old at the time, but I had the concept for a dramatic story about the power of family, the dangers of obsession, and how toast is delicious.

This story involved holiday themes, but was still an enjoyable read anytime of the year. It had little allusions to other famous comics but featured original protagonists and villains. I called it, “The Bat Brothers,” and it is quite possibly my finest comic-work. 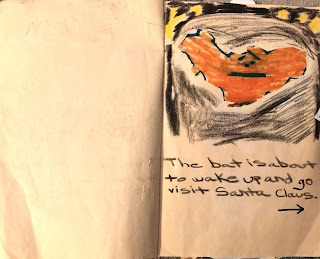 “The Bat Brothers,” follows an assortment of bats who are brothers (of course) in a, “Day in the life of,” style, focusing on the brothers as they embark upon a quest. The story opens with the first Bat Brother focused upon in the tale waking-up to go visit Santa Claus. 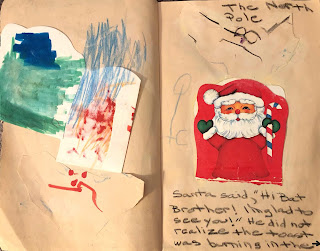 I then used my masterful skills in mixed-media collage to glue an illustrated Santa from some other book/magazine/whatever into my comic. Santa eagerly greets the Bat Brother as he arrives but danger is brewing. 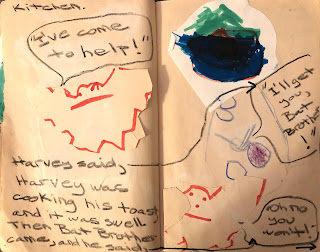 Santa did not realize the toast was burning in the kitchen, putting all of his workshop at risk! The Bat Brother comes to help, but one of his longtime-nemeses, a fellow named Harvey (a little in-joke of Harvey Dent AKA Two-Face sharing a similar name and this story also involving a bat-theme), is there to try and stop him. I do not say within the story if Harvey is to blame for this toast burning, but the context is clear for the reader. 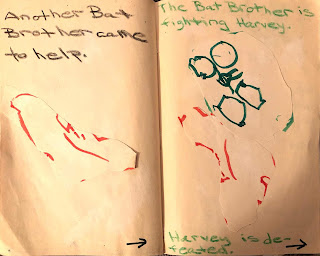 This brings us to the first big fight in the book between Harvey and a Bat Brother, who thankfully has one of his siblings fly-in to help ensure, “Harvey is defeated.” 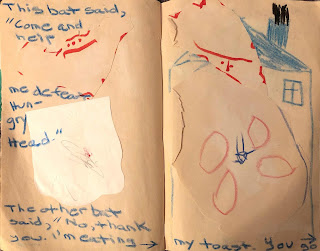 Before the two Bat Brothers can celebrate however another foe, “Hungry-Head,” arrives on the scene, ready to fight. Hungry-Head is a terrifying sight, a floating disembodied head that always wants to eat.  One of the Bat Brothers requests his sibling assists him in stopping Hungry-Head, but here a betrayal occurs! One Bat Brother refuses to help, instead eating some of the toast that was prevented from burning. 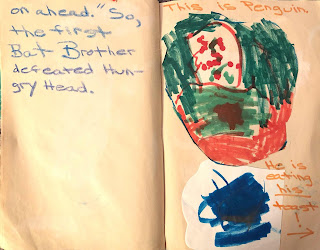 Thankfully, as the next page makes clear, the first Bat Brother defeats Hungry-Head, even without his sibling's assistance who let his desire for delicious toast drive a wedge between the family. The book then briefly cuts to an interlude with a penguin named, “Penguin,” who is eating his toast as well. Penguin does not appear again in the comic,  making today-me wonder if young-me had a plans to return to this mysterious animal in a future, unmade comic. 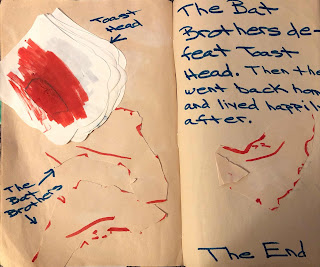 After that quiet interlude we cut-back to the Bat Brothers only to find that while the story was not focusing on them Toast-Head appeared. Toast-Head is a villain somewhat like Hungry-Head, but made entirely out of toast. I again don’t outright say it in the text, but clearly Toast-Head desires revenge for all the toast that has been eaten, and in an ironic twist the Bat Brother who abandoned his sibling to eat toast now requires that Brother’s help. They unite together and defeat Toast-Head up at the North Pole, in the process learning a valuable lesson about family, friendship, and the importance of being reliable. The Bat Brothers stop Toast-Head and proceed to return back home, assuredly living happily ever after. 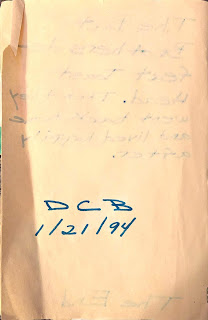 The comic isn’t perfect and has some plot holes. The mystery of the penguin named Penguin with his own toast begs to be returned to, and I don’t address how Hungry-Head and Toast-Head were possibly linked to one another. After all they seem almost too similar for it to be a coincidence they both appeared at the North Pole, and if Hungry-Head wanted toast so badly perhaps it was because he actually was looking for Toast-Head? Had they been friends or a couple? It’s a notable unanswered question, but then again considering I was literally only five years old I think we can excuse some inconsistencies with the storytelling.

“The Bat Brothers,” sat in a drawer in one of my old desks for decades until I dug-it out on our most recent trip to Cortland to visit my parents and sister. Instead of leaving it in there for eternity I thought it might be fun to share this old story I made as it is kind kind of fun to peer-back at my random ideas when I was a youth. We all have creativity inside whether we are five or a lot older (I am so old now), and this little comic I made shows that. Now I wonder if I could get an artist to work with me and make a new version of this comic with some updated plotting and art, or possibly we could do a follow-up book about that darned penguin named Penguin—what is his deal?
Posted by David Charles Bitterbaum at 9:03 PM