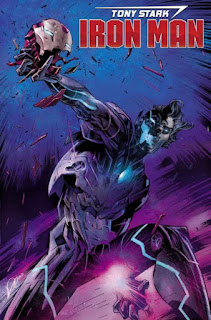 When it comes to naming a villain who at times struggles to be interesting, one I can easily think of is Ultron. Created by Hank Pym (in the comics, in the movies Tony Stark is his, "Father," of course), Ultron has his whole deal being wanting to wipe out humanity...and that's about it. We do have a rare occasion or two where Ultron has had something more interesting going on (that time he considered conquering the galaxy, the weird day when he tried to seduce Hank Pym as a robotic version of his ex-wife), but it is telling my favorite story involving the character was one that imagined a world where he hadn't been created. I know somewhat recently Ultron and Hank Pym merged into one person or something ("Rage of Ultron," was weird), but that seemed to do little of note for the character being at all intriguing. Hence, when I saw the press for a new story-line in the, "Tony Stark: Iron Man," comic titled, "The Ultron Agenda," I assumed it would sound very dull. Then I saw Machine Man was the villain. Wait, that's interesting.

Aaron Stack AKA the Machine Man was created by Jack Kirby to tie-in with the classic film, "2001: A Space Odyssey," of all things. Over time other writers tackled the character as well as varying interpretations of him (Stack was very important in the out-of-continuity, "Earth X," to name one example). Stack arguably gained a whole new group of fans when Warren Ellis used him in the cult-classic, "Nextwave: Agents of H.A.T.E.," series that painted Stack in a light that was both hilarious and a tiny bit sympathetic. He then popped-up in other series and is one of those cult-characters that has a small and dedicated fan-based but otherwise gets ignored a lot (kind of like my personal favorite character, Moon Knight). To see that Aaron Stack AKA Machine Man is going to be leading a robot uprising dedicated to making sure A.I. takes over the planet suddenly sounds pretty attention-grabbing as opposed to if it was simply Ultron trying to just wipe-out humans for the 50th time for little reason other than a slew of daddy-issues about his creator. 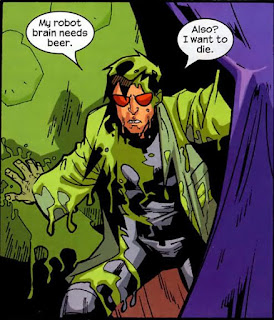 Reading that the, "Ultron Agenda," story-arc will explore concepts of just how, "Alive," the artificial life in the Marvel Universe is sounds pretty snazzy. It was a concept touched-upon to a good degree in the stellar, "The Vision," mini-series (fun fact, Vision is technically the son of Ultron, making Hank Pym Vision's Grandpa) and one worth exploring. Plus, with a character as interesting as Aaron Stack AKA Machine Man I already expect a lot more interesting stuff to occur than if it had been Ultron himself again.
Posted by David Charles Bitterbaum at 12:46 AM