A Quick Observation About an Ariana Grande Song 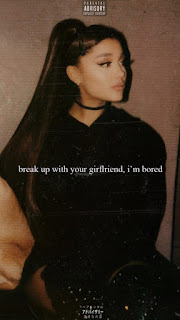 Ariana Grande is a bit of divisive personality currently, with there being lots of debate about if she's appropriating Black culture for monetary gain (opinions range from, "Yes," to, "It's Complicated," basically). That said, there is something weirdly admirable about some of the lyrics in, "Break Up With Your Girlfriend, I'm Bored." Within the song she tells a man that she would like him to leave his girlfriend and then have sex with her for no reason other than she bored. She is sure to point-out in the song she is aware this is wrong, mean, and unfair, but she's basically really horny, and yes, bored. Also, to Grande's credit she is not willing to cheat with this man. She will only, "Let you hit it in the morning...like it's yours," once he is officially single. This essentially means she respects a relationship enough to never have someone cheat, but is still sleazy enough to encourage someone to end a relationship so she can get a good boinking--which she fully realizes, "Ain't right," but she doesn't care.

I suppose the song is in a way weirdly thoughtful, because if a man is willing to leave his girlfriend simply if Ariana Grande is bored and willing to have sex with him (if he's single), the woman he's leaving doesn't deserve such a flaky and crass boyfriend. Yes, everyone, Ariana Grande is doing the woman dating the man she wants to bang a favor. Again, it is all weirdly admirable.
Posted by David Charles Bitterbaum at 2:43 PM