Funko Friday: A Website Was Hacked for Exclusive Funko Pops and Dear God That is Silly

A Recipe for Trouble

Update: It went live for real today at 2PM and everything sold-out within 10 minutes. At least it was supposed to go live this time.

I've discussed before (I think) how with Funko Pops sometimes there will be ones that come out for big comic-conventions and if you're not at the show other retailers will sell them--a, "Shared Exclusive." For example, New York Comic-Con just wrapped and there were many Funko Pops produced to be sold at it or partner-retailer stores. If you couldn't get a, "Gearhead," at the show, Target had some, or if you needed the newest Pop of Supergirl, Barnes and Noble should've stocked her. One company that was given shared exclusives was Toy Tokyo, which has a web-shop but otherwise just has a retail store in New York City. Lately what they have done for their shared exclusives is make a webpage with a password and shortly after that page is created tweet the code out randomly a bit after the convention is done and they know what they still have in stock to sell. Some days ago they put up the latest page and kept telling people little hints about when it might, "Go live," trying to use cutesy metaphors about when Hobbits have meals or such. It was obvious that it would be a simple word however based on past occasions, and the page was up for awhile sitting there. People could even try and type in a password, and everyone was getting annoyed with the arcane clues being occasionally posted online, so that was a recipe for trouble. You can guess what happened next. 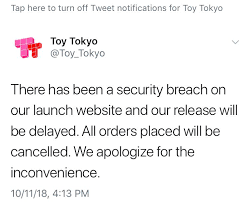 Yes, someone either was able to guess the password or programmed some bots to simply try a bunch of words as quickly as possible until somehow it was found-out that of all things, 'Nuclear," could get you into the web-page and able to purchase the Toy Tokyo pops in a bundle. It got tweeted, shared on Facebook, posted on Reddit, and so forth. Word spread fast. Once Toy Tokyo saw all these orders they shut the page down, declared any purchases would be cancelled, and said the official release date was going to be pushed-back, to which many people wondered, "Pushed-back from what? You never even told us a date or time!"

Now, I am disgusted that people were so desperate for Funko Pops that they actually dedicated time and effort to hacking the Toy Tokyo website. You must have gone a little crazy with this hobby if you're actually trying to break-into a website for a fun toy product. I also understand that Toy Tokyo acted in a  foolish manner in regards to having proper website security, plus they were making a lot of people angry with their daily vauge-as-Hell hints about when they'd finally sell their damn Pops. The hackers are in the wrong, but Toy Tokyo sure could have done a lot more to prevent what occurred. The whole thing is a mess and now I don't know when people will be able to get their Orange Chrome Batman or any of the other Pops. I just hope it is sooner than later and Toy Tokyo drops the whole cheeky-hints bit.
Posted by David Charles Bitterbaum at 9:11 AM