The First Two Issues of Invasion From Planet Wrestletopia Are Great Fun! 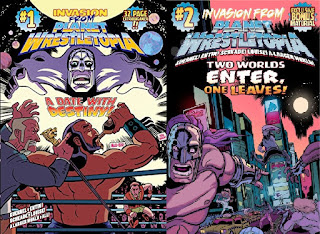 I'm always pleased when independent or small-press creators of comic-books send me a message, tweet, or piece of pineapple with a message carved into it. There are so many comic-books out there that even I--a person who spends too much time on the internet reading about comics--don't know about, and if somebody has the time to pop-up in my DM's with something other than a dick-pic or hate-mail I'm always eager to receive it. Therefore, when Ed Kuehnel from Suspicious Behavior Productions sent me a message asking if I'd like to read the first two issues of his comic, "Invasion From Planet Wrestletopia," I told him I'd be glad to do so. Having checked the first two entries in his series out now, I'm glad he messaged me because its a great read!

"Invasion From Planet Wrestletopia," is a mixture of action, comedy, and science-fiction written by Ed Kuehnel and Matt Entin, with art by Dan Schkade, and colors produced by Marissa Louise. It follows a struggling wrestler named Rory Landell who basically as a gag when he quits professional wrestling due to being fed-up with the politics of it says he doesn't need a world championship because he is the, "Galactic Champion of the Universe." This attracts the attention of space aliens who don't take kindly to having their wrestling supremacy challenged and leads to a whole mess of trouble. It's a humorous idea and the writing by Kuehnel and Entin play-up how there is a silly element but they also ensure we see how Landell is struggling as someone who loves the sport/art of wrestling despite all the difficulties and hardship pursing his dreams of pro-wrestling has brought him. 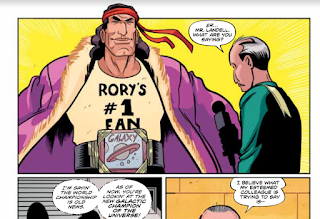 Schkade's art and Louise's color-work are both phenomenal, at the kind of professional-level you'd expect from a comic sitting on the stands with other releases from big-name publishers. The stereotype at times goes that indie-comics have lower-quality/more abstract artwork, but Schkade is stellar from the elaborate wrestling get-ups to showing folk battling it out the ring with a feeling of frentic energy matched by Louise's effectively bright and striking colors. Between the great mix of humor and heart-felt sentiment with the fantastic artwork I can say the first two issues of, "Invasion from Planet Wrestletopia," are stellar. You can find out for yourself via following links from their website for the e-reading format of your choice. I rate both issues 5 out of 5 stars and can't wait for more!

A digital copy of both issue #1 and #2 of, "Invasion from Planet Wrestletopia," were provided for the purpose of review.
Posted by David Charles Bitterbaum at 1:28 PM