To My Immense Surprise, "Venom," is a Box-Office Hit 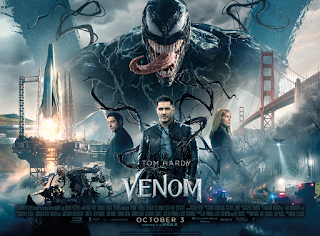 I'm still working at gathering my thoughts about NYCC, but have something else immediately bugging me. It is just...I honestly did not expect this. I read reviews that declared, "Venom," was plainly terrible, and even positive reviews basically went, "It's not that bad." I had talked about how a Sony film universe featuring characters whose main defining trait is their relationship with Spider-Man could not work with that element removed. Then Venom goes to make more than $80 million domestically and top-out over $200 total with International sales put in the mix too. Wow. Perhaps there are lessons to take from this, but I'm frankly stunned.

Tom Hardy, the star of the movie, himself didn't seem that enthused about it during his press-tour, but I guess he'll be eager to get another check to do an assured sequel now (and from what I've heard about the mid-credits scene, there is at least some potential there). I just want to restate how utterly shocked I am that, "Venom," made as much money as it did, thanks I guess to a mixture of people with fond memories of his comics in the 1990's, young fans who thought it looked at least passably entertaining, and individuals who inexplicably find Venom super-sexy.
Posted by David Charles Bitterbaum at 11:05 PM