I've Been Continuing To Read Manga And Have Reviews

Yet Even More!
I previously discussed how I was dipping my toe into the, "Manga," pool more, and then I talked about when I continued to read some more books. I've been reading yet even more Manga-books lately thanks to my local libraries and good deals at book-stores, so I thought  I would discuss what I've picked-up! 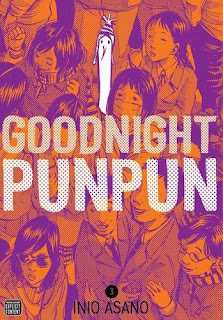 Goodnight Punpun Volume 3
Punpun grows older with every volume, and seems to be less and less a precocious little kid than a bit of a self-obsessed jerk. I don't know if Inio Asano has intended for Punpun to seem that way, but he kind of does. As seemingly sweet characters reveal their metaphorical fangs, folk get hurt, relationships get cheated on, and throughout it all there is still some bits of great humor that help keep things from feeling too dark--plus as always Punpun and his family are weirdly illustrated as minimalist blobs while everything else on the page is hyper-detailed in its drawing or incorporation of photography. The first volume of this series has a melancholic vibe but also was fun and absurdist. There still is some of that in these later books, but even the quirkiest characters have been revealed to have a decent amount of depth, with mean characters shown to maybe not be all bad, and seemingly perfect folk making it apparent they have a number of flaws all their own. This is one of the stranger and best comics I've read, and as with my reviews of the previous books I encourage you to check this out.
5 out of 5 stars.

I quite liked the first volume of Citrus, a weird little slice-of-life Yuri-themed tale about two step-sisters with an extremely complicated and somewhat taboo relationship. Written and illustrated by Saburouta, my library had the other five volumes that have come in out English so I requested they be put on hold. I gave them all a read and now here we are! As for volumes #2-#5, I enjoyed them a great deal too but started to notice the plot will at times advance certain aspects at quite the glacial pace.

The whole point of this manga is centered on the relationship between two step-sisters and their will-they-or-won't-they relationship (as presented to younger-adult readers), but it finally takes to the end of the 4th volume/start of the 5th volume for the characters to agree they are actually dating and for the plot to show some glimmers of life outside of pages and pages of repressed longing and, "I don't know how to handle these feelings,"-type chapters. It results in books #3 and #4 feeling like they drag a bit, with the attempt to spice things up by introducing new characters in each who complicate things coming off more as filler than exciting plot developments. As I mentioned though, the fifth volume finally seems to have some momentum as an interesting development occurs with a student-government election and actual stakes (the risk of being expelled) as opposed to just the earlier books never-ending, "I like you--no I don't--yes I do--no I don't." I'm thinking when the sixth book comes out it will keep the invigorated pace of the latest volume, at least I hope it does.
Volume 2: 4 out of 5 stars.
Volumes 3 and 4: 3 out of 5 stars.
Volume 5: 4.5 out of 5 stars. 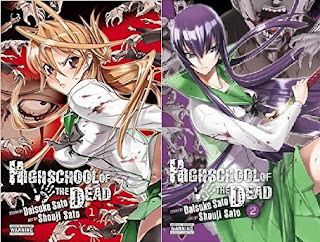 High School of the Dead Vol. 1 & 2
I read this, but honestly have trouble recalling much about it. I recently read the writer passed away, which is sad, but that's about all I remember off the top of my head. I mean, I didn't hate it, but clearly not much stuck with me. Essentially a zombie outbreak occurs and the first volume follows some high school students in Japan as they struggle to deal with it. Volume 2 gets a bit more interesting as we see how other folk are handling the outbreak, because frankly the high schoolers themselves are a little dull and some bathing-related nudity in the 2nd volume makes it clear the book realizes readers need something to keep their attention. The art is passable and at times shows a nice flourish during scenes of zombie-fighting action, but little stood-out to me--as I said, I'm having trouble recalling much of note in this manga. I don't regret reading it, but if I had paid for the books (as I did with some of the manga I've reviewed) as opposed to getting them from my local library I might be a little perturbed. I'd rate these a boring-yet-not-terrible...
2 out of 5 stars (for both volumes).


Aqua Bless and Peachy Triangle
I read and quite enjoyed the sexually charged, "Vanilla Essence," which was basically illustrated pornography/"boderline h/hentai", but really sex-positive and peppy pornography. I reached out to the publisher behind the book, Project H (please note that website is not safe for work at all), who were happy to provide some other titles for review I thought looked interesting--specifically, "Aqua Bless," and, "Peachy Triangle." "Aqua Bless," is from the creator of, "Vanilla Essence," Yamatogawa, and has some fun and sexy tales, with the first one being especially striking in how it tells the story of a young woman who has psychic abilities she can't control that involve her feeling the sexual pleasure of everyone around her--despite physically being a virgin herself. If I may spoil the twist at the end of the story, it seems her gift may actually be shared with others through the act of having sex, almost like some kind of sexually-transmitted-psychic-power--it is good and silly fun. Another humorous yarn is where a twin poses as her sister to get a young man to admit his feelings for her--but as always seem to happen in situations where twins pose as one another things go pretty awry. It's a really funny (and sexy) book for sure.

"Peachy Triangle," is--as the title hints--about a love triangle. Written and illustrated by Renya Sabashi, it centers on a young man named Kazuki who is interested in a classmate named Ako, but she's more into another girl named Chikage. They enter in a poly-relationship of sorts but a variety of factors come-up that result in some dramatic (and raunchy) situations. There are some other shorter stories besides the main one but they were a little less remarkable. "Peachy Triangle," was overall a fine book and interesting, but it lacked as much of the humor that, "Aqua Bless," had that made it so enjoyable. Both books were great though and if you like your manga highly sexually-charged, Project H doesn't disappoint.
Aqua Bless: 5 out of 5 stars.
Peachy Triangle: 4 out of 5 stars.

Inuyashiki Volumes 2-5
The first book wasn't too bad, but also lacked much, "Wow," factor. I was able to get my hands on books 2-5 thanks to the City Library however, and read through all the volumes I got in an epic multiple-hour reading session one weekend. Having read more of the story I would say it definitely gets more interesting, and whereas I found, "Gantz," starting to lose me with its 3rd book after five of these I'm still quite intrigued by this title. Writer and artist Hiroya Oku has been giving us an interesting take on super-hero styled stories, but without the usual capes and such. This instead is more grounded, focusing on a world where our hero (Inuyashiki Ichiro) has his body destroyed and rebuilt by aliens, and in an effort to still feel human goes around helping others. What is interesting, is that in the second book we focus on a young schoolboy named Shishigami  Hiro who also was affected by that alien crash, but he goes in the opposite direction. Hiro starts murdering people with his powers for little reason other than it makes him feel alive, and then when asked by a friend agrees to try helping people instead, but at this point it is too late and everyone wants to hunt him down--including Ichiro.

It is fascinating and terrifying how Hiro is essentially a sociopath who can as easily murder people as heal them with nary a second thought. After all, if these two people were given powers and did such drastically different things, just imagine what could happen if more people were given this, "Gift." The books follow Ichiro as he helps people and Hiro as he does the opposite, with a big final-battle not yet occurring in any of these books, but clearly on its way to taking place in the near future. Some solidly entertaining reading for sure.
4 out of 5 stars. 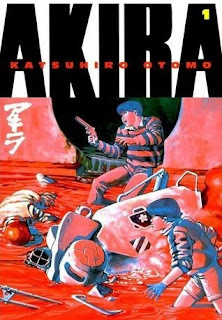 Akira Volume 1
Ah, we might as well close this review segment on an OG of manga (and anime). Until recently (as these reviews have discussed) I wasn't especially into manga, and the only anime-properties I enjoyed were, "Gundam Wing," and without a doubt, "Akira." A fascinating piece of entertainment that some consider the most important animation property of all time, before the movie sent shock-waves through the world there was of course the manga. As for rating the manga? I mean, its got great artwork, an exciting story, and is otherwise a really great time. I don't think at this point when something is this ingrained in the cultural zeitgeist that it would matter what I'd rate it in terms of stars, but I can easily say it is...
5 out of 5 stars.

A Variety of Interesting Books
Some of what I read was really good, other books were admittedly a bit lacking. I continue to greatly enjoy manga and its variety of genres, however. Should any of my readers have a manga they would recommend please feel free to comment on this post or email me. I am so lacking in knowledge when it comes to manga as compared to Western-comics so I always appreciate tips on what to check-out next.