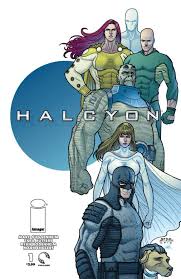 I've read a lot of comics in my life, clearly. There are ones that I found amazing, books I found terrible, as well as comics  that I immediately forgot and others that stuck with me. One comic I found really enjoyable and which also stuck with me would be, "Halcyon." A mini-series that went five issues and was originally announced under the name, "Utopia," before a title-change, It seems to barely be remembered online, although I can find some other reviewers who liked it.

Written by Marc Guggenheim and Tara Butters, the general concept in the comic is one that I find extremely clever in that all the anger and violence in the world among humans has been decreasing over the year to the point where nobody wants to commit a violent crime, fight over religion, or go to war about resources. It is obvious that this isn't normal, but people figure it is okay, because what's so bad about World peace? The Batman-esque hero Sabre feels this is all horribly wrong though, and later in the comic discovers that the big-time super-villain, Oculus, actually created a device that has been beaming out a signal of sorts that makes everyone peaceful/non-violent. Basically, he figured the most evil thing he could arguably do to the heroes was make them unnecessary in a happy and wonderful world--basically doing something that makes him the hero.
However, once the truth is realized Sabre goes and tries to destroy the device, with everyone discovering the closer you get to the beam/transmitted the less it affects you. Hence, plenty of violence occurs and Sabre basically becomes the villain in his wanting to make the world a miserable place again because he claims people deserve free will...but maybe he just hates being made obsolete in a land of joy and peace.

Ryan Bodenheim provides artwork that is very clean, precise, and works wonderfully for this comic at showing these incredible powered beings coming to terms with the fact they are now obsolete. Bodenheim's artwork has a nice formal look but he can break-out some stellar imagery at times, such as in the fifth and final issue when Sabre releases an energy blast that rips a former colleague apart. After some relatively restrained artwork it is a shockingly graphic and grotesquely gorgeous image. Observe: 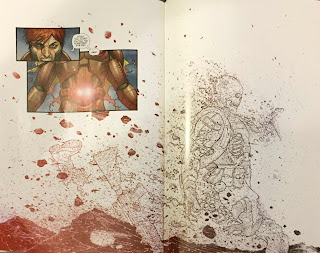 "Halcyon," was a book that really struck me when I first read it upon its being released back in late 2010 through early 2011 and when I was rooting through all my comics to identify ones to sell I made sure to put it aside and re-read it, having recalled that I found it quite well-written and full of great artwork. I would recommend people seek it out if they like super-heroic stories with a dash of philosophy that explores that question of just what happens when the heroes, "Win," by having violence end, but in order to truly win in this case they have to let themselves lose, in a sense. It's great stuff.
Posted by David Charles Bitterbaum at 10:27 AM