Even More Manga!
I made a post somewhat recently about manga I've read in an effort to further broaden my horizons in regards to the kind of stuff I read. Besides getting used to reading the books somewhat, "Backwards," I've been mostly pleased by my ability to locate some decent yarns thanks to various recommendations from people I know personally or have read the words of/listened to on podcasts. Here are some more books I checked-out recently. 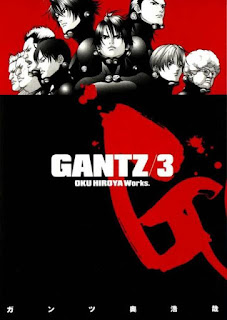 Gantz Volume 3
I was entertained without having to think too much by the first two volumes of, "Gantz," and their absurdly gory violence mixed with T&A definitely was zany. In this third volume I was kind of disappointed. I understand that after all the action of the 2nd volume this one is a bit of a cool-down, and a bit of quiet is fine...it's just that time of quiet is used to throw in some weirdly homophobic and sexist bits. A scene occurs with discussion about some bullies who have a gay crew-member who likes to rape male gang-victims, and the mentioning of this bully being gay and apparently sexually-assaulting other men serves no purpose to the story other than to foster the usual gay-panic concept in some stories of, "Oh no, the hero will be sexually violated and less of a man if he doesn't fight back!" Also, the only main female character basically continues to act hapless and asks another character if she can live with him, but as a, "Pet," which is a weird added element to how she's just crashing at this guy's house but wants to be thought-of as his, "Pet." Again, this doesn't really serve any purpose to the story or is used to make a statement, it's just odd.

These weird and off-putting elements in the volume don't ruin things, however, as there are still some interesting parts to the story--such as discussion of if the characters who thought they were saved at the last minute by the Gantz (weird orb-thing) are actually just soulless constructs/copies that think they are human, and the further intrigue about just why the mysterious Gantz is having people kill aliens continues as well. Still, compared to the general enjoyment I got from the first two volumes this one was pretty underwhelming.
2 out of 5 stars. 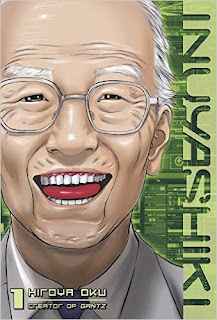 Inuyashiki Volume 1
Somewhat moving on from our discussion of, "Gantz," here is the latest series coming out from its creator Hiroya Oku, who is now doing this series. It is a bit less violent and sexual (the company releasing it has rated it as recommended for 16-and-above as opposed to, "Gantz," which has a strong, "Mature Readers Only," tag). That doesn't mean it is any less odd or over-the-top than you would expect from someone behind a book as strange as, "Gantz," and in a clever bit of being meta the first volume even has two characters arguing over whether the series is cool or lame. Basically a man who is 58 but looks older, is hated by his family, and all-around has a miserable life suddenly is hit by an alien object, rebuilt, and now has a ton of powers.

He uses these powers in this first book to save the life of a homeless man from some violent teenagers and that's basically it other than a glimpse of another person who may have gained powers (and maybe is not going to do good things with them). It is way too early in this series to have a clear picture of the tale, but based on just this book alone I was relatively pleased. A decent story so far and some great art makes me want to seek out at least the next number of books that are available in English (the story is still coming out and of course is released in Japanese volumes first). I would rate this a solid all-around...
3 out of 5 stars.
Vanilla Essence
All joking aside about manga sometimes being mistakenly thought of as nothing-but-porn-comics by U.S. citizens who don't know how many varieties of manga exist, this book is without a doubt extremely erotic. I became familiar with this book because I am often on Kickstarter looking at campaigns for all the wide-variety of stuff on there, but usually comics as some cool stuff at times occurs on the site. That is how I one day came across a Kickstarter campaign for, "Vanilla Essence (note this link isn't exactly the most safe-for-work)." I was surprised as Kickstarter can be pretty strict about erotic-stuff on their site, and this book by the writer/artist named Yamatogawa looked quite sexual. Kickstarter will allow things that are overall judged to be sex-positive and aren't porn so much as erotica thanks to, "A positive message and artistic value." So yeah, this book by Yamatogawa was judged to be okay under the rules of Kickstarter and got funded handily.

I didn't back the Kickstarter as even though I was curious what allowed this book to be classified more as, "Erotica/Borderline H," than, "Straight-up porn/Hentai," I lacked the funds at the time. However, I was able to sell some stuff on eBay later on and ordered me a copy of the exact same book that would have been sent to Kickstarter-backers so that I could see just all the fuss was about regarding this publication. Having given it a read I can conclude it is extremely explicit and full of illustrated-in-a-hardcore-manner sex, but also that yeah, it is pretty sweet and pleasantly sex-positive. The stories often have a fun or clever motif and they all portray sex as something fun and enjoyable with a humorous-bent that compliments the proceedings well. Whether a young woman who enjoys secretly video-taping others having sex meets her match, or a cyclist engages in a whole different kind of exercise with a new partner, "Vanilla Essence," maintains a chipper and fun attitude that reminds readers how despite all the hang-ups and taboos regarding sex, at the end of the day when everyone is consenting and eager it can be a really fun and wonderful thing. Plus, Yamatogawa's notes about his writing and drawing of the stories at the end of some of the yarns gives everything a nice personal touch as well. I know a lot of Borderline H/Hentai manga can be extremely sex-negative and exploitative, but this was a great read which was as charming as it was erotic!
5 out of 5 stars. 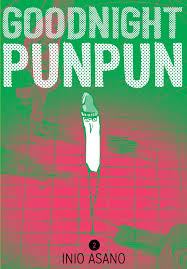 Goodnight Punpun Volume 2
The first volume of this book was one of the weirdest stories I've read in some time. The second volume is weird as well, but a Hell of a lot darker and shifts a lot of its focus to Punpun's Uncle and why he's so miserable. Inio Asano continues to follow the unique art-style of having everyone and everything be drawn super-detailed except for Punpun and his family, which always creates a weird clash between what we see on the page, yet it weirdly works quite well too. This volume overall just shows life offering a hint of things getting better for Punpun and his loved ones, before towards the end it becomes apparent that yeah, things are actually going to just get even worse. It's fascinatingly sad stuff and even though I felt awful after finishing this volume I now just want to seek out the 3rd even more. Amazing stuff.
5 out of 5 stars. 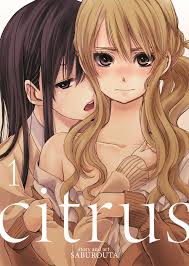 Citrus Volume 1
I heard about this manga written and illustrated by Saburouta when I saw it mentioned briefly by J. Caleb Mozzocco on his blog in an almost embarrassed manner as it is a, "Yuri," title. He always seems to post good reviews of manga and if he's, "Suddenly really into," something I figure it must likely be good. I looked into it and this slice-of-life manga sounded interesting and raunchy enough to be fun. For those who don't know, "Yuri," basically translates into, "Girl-love," and centers of stories about two women who love each other--not always in a lesbian manner, but often with that as an element. Yuri is generally a lot less popular than, "Yaoi," which means ,"Boy-love," and involves stories about men in love (and are hugely popular in Japan). These stories are generally not pornographic in nature (e.g. the aforementioned Hentai/Borderline-H), but instead could be thought of as a genre umbrella. Just as how in the United States we have LGBTQ-focused stories that can be everything from slice-of-life to science-fiction, to fantasy, Japan has that too. I'm not opposed to reading Yaoi or Yuri in my effort to read more manga (I love plenty of American stories with a LGBTQ-focus after all) and seeing positive things about this made me want to try it out. I was pretty pleased.

"Citrus," involves a high-school student (Yaoi and Yuri often will have barely-of-age characters, but as the stories aren't pornographic people generally don't mind) named  Yuzu whose mother has married someone new, resulting in her having to move into a new house and enroll in an all-girls school. On the first day of school she quite irritates the Student Council President, Mei, with her outspoken nature and flagrant disregard for the dress code. Then she comes home and meets her new step-sister, and yep, it's Mei. Things get more interesting though as Mei strangely alternates between flirting with and being mean to her step-sister. Yes, I did not realize this but, "Citrus," is both a Yuri story and a step-sibling romance story. The whole thing sounds really racy but is presented in a matter-of-fact manner as opposed to being taboo that the story never feels, "Dirty," it just is kind of edgy. Plus, Saburouta's artwork is cutesy enough things don't feel too, "Wrong." I mean yes, there are some saucy moments of kissing but this book is labeled as, "Ages 16+," and does't push the envelope too far in that regard. It's an odd story with all these strange elements but the characterization of Yuzu and Mei is fascinating enough I think I would like to check-out the other books from my local library where I got this one.
4 out of 5 stars.

Interesting Reads
As I said, reading the books in a, "Backwards," style of somewhat right-to-left is still a bit jarring for me considering I've spent 99.9% of my life reading left-to-right, but that aside these have been some great reads. The stories in these books sometimes feel a little strange, ("Citrus," and its step-sibling romance) but that may be more of a cultural difference than anything else. In my effort to read more manga I think I'm coming along pretty well, and clearly there are a wide-range of books and stories out there for sure.