Finally Had the Chance to Play It!

I've talked about how I hadn't played it yet, and was waiting. However, I broke down, got, "Fallout 4," when there was a good deal on it and have played it more than I probably should have off-and-on over the last few weeks. Yup, I'm obsessed with another game and my wife has long since grown tired of hearing all the never-ending gunfire that occurs when Preston Garvey isn't harassing me to help a settlement.

After a good chunk of time invested I've done some of the earlier main quests, a chunk of assorted side quests, and built some settlements. I still haven't discovered the faction known as, "The Railroad," but have done a decent amount of exploring, leveling-up, and modifying my weapons. Before I discuss all that I like let's address the less-positive things, however. 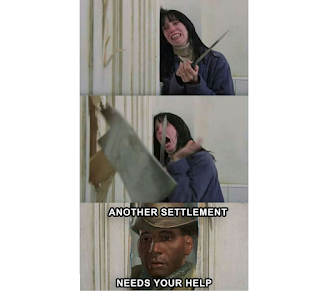 First off, I agree with everyone that Preston's relentless harassment about settlements needing help is a huge pain, even if re-taking, "The Castle," felt good. Next, I'll join the chorus of people who declare that while this is indeed a great game, it isn't necessarily a superb, "Fallout," game. It in fact is more of a big action game with some light RPG elements in the world of, "Fallout." It isn't the series fans fell in love with, but I will say that is actually okay, because even if this continues the march away from the deeper elements of the first game and sequel (with, "Fallout 3," of course being the first that was first-person and really switched gears), it's still a great time. Another thing that can be a pain is how even if combat is better with this entry it still has some concerns that makes gunplay improved over some of the previous entries, but that not great. This can be disconcerting because as I just mentioned, this game has a lot more of a focus on shooting than some previous entries have. Earlier games allowed you to solve many a quest without violence, instead permitting charisma, intelligence,or the like to help you get out of a tight spot. This game? I was able to talk my way out of one fight, but anywhere else I went was just an intriguing-looking place full of people eager to kill me.

You can be someone in this game who shoots their guns a lot, or runs up and smacks people whilst occasionally switching to guns for the enemies too high-up to hit, that's about it. Then of course there are the bugs, the delightful bugs. Some make the game suddenly crash on you (it has happened to me enough I am saving even more obsessively than usual) and others just make everything look extra funny. They are an annoyance, but with any, "Fallout," or, "Skyrim," game from Bethesda bugs are to  be expected and hopefully eventually patched. Still, despite all this there is some fun stuff too! That brings us to... 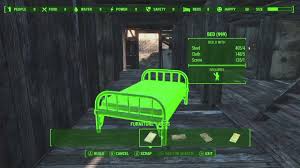 The Commonwealth is a fascinating place. I've always enjoyed exploration in any of the, "Fallout," games and this 4th entry in the series continues that. Whether I'm stumbling upon strange little towns hiding dark secrets, abandoned vaults, a ramshackle city built in Fenway park, or simply climbing up a tall tower, "Fallout 4," is a beautifully desolate place full of scenery I adore, however melancholy it is. Plus, one big thing that this 4th game brings in is building-up settlements. Even if it bugs me for Preston to keep demanding I help places, there is a thrill to taking an empty patch of land, building some shacks, food, water, and then hooking up a radio beacon calling-out for citizens to come call this once-barren plot home.

I also enjoy my companions, with the assortment I've met proving to generally be good company, and more useful than annoying--something previous games would sometimes lack. I don't want to spoil the story too much as it has some interesting twists and turns, but I will say it cleverly makes you engage in some tough decisions later on in the game that carry actual consequences and, "Lock-off," other quests from certain factions, as it were. Another element I quite adore is how I can modify my weapons, clothes, and suits of Power Armor. Speaking of that famous getup, in previous games the Power Armor was just that--some extra armor--in this game it is like a walking vehicle you hop in and power with fusion cores you find scattered across the land. You can tweak the features as well as give it a spiffy paint job (if you find magazines with directions to do so) and it comes in handy during the more difficult fights you may face. The huge amount of customization options within the game really help give it more of a personal touch, with everyone able to make their own snazzy settlement, weapon, or suit of Power Armor. 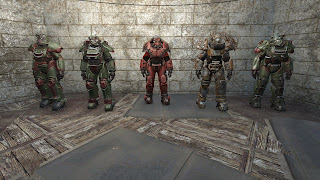 Even though the game isn't as full of depth as past titles in the series, it still is some good fun and has stolen a great deal of hours from me. I continue to be a big fan of the, "Fallout," games and even if this 4th one is more of an action-type game than previous ones, I still adore it. Plus, whenever I want to do my stat-heavy gaming like in the old-school, "Fallout," games, I always have, "Wasteland 2." Now I'm eager to continue exploring, and seeing what future downloadable content might hold!
Posted by David Charles Bitterbaum at 9:14 PM