What Bugs Me the Most About Ted Cruz

It Isn't Just How Awful He Is As a Human Being... 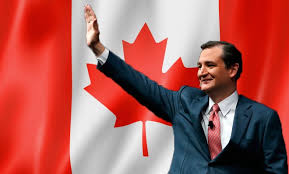 Besides the never-ending hot-air-spewing machine that is Donald Trump (now endorsed by fellow idiot, Sarah Palin!) the Republican party doesn't really have a candidate that they consider reanonable to nominate  besides Ted Cruz. I mean, Ted Cruz still has plenty of people who hate him, but maybe hate him just a little bit less than Trump--although plenty Republicans would rather be rid of both. The thing is one aspect about Cruz really, really bugs me. It isn't his horribly outdated views on marriage equality, his claims he wants to repeal the ACA, or all that. I mean, those do bug me, but all the Republican candidates scream that nonesense. No, what bugs me is the startling hypocripsy on display within the party considering that a man born in Canada is being touted as a possible candidate for President after all the, "Birther," nonesense we put with regarding Obama.

Picture this, a man born in Hawaii to a mother who was a U.S. citizen (born and raised) and a father born in Kenya becomes President. A bunch of crazies claim he was actually not born on U.S. soil and therefore can't be President, despite countless evidence that he was born in the state of surf, sun, and volcanoes. To make this really clear, someone who could prove they were born in the United States, to a parent who was an American had a bunch of people claiming he somehow was the President illegally. This man is of course our current President Barack Obama.
Now, here's another picture for you. A man is born in Canada to a mother who was a United States citizen (born and raised), and a Father born in Cuba. This man who has never denied actually being born in Canada comes to the United States, works in politics, and then attempts to run for President. Suddenly, all the people who proclaimed the first man--actually born in the U.S.--couldn't be President shut-up for the most part, with only a few going, "Wait, isn't this new guy Canadian?"

Two men, both with American mothers and foreign fathers, one born on U.S. soil and one not. Wouldn't this mean that if the one who was born in Canada can be President than even if the one born in Hawaii was birthed in another country he still would eligible for the Presidency (or they both would be ineligible)? I mean, this is perfectly logical, right? 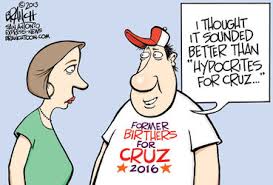 Well, maybe the fact that this is logical is why suddenly all the Republicans who decried Obama as some kind of, "Evil foreigner," are suddenly perfectly okay with a man who didn't renounce his Canadian dual-citizenship until 2014 becoming President, because Conservatives tend to eschew logic for Creationism and rallies dedicated to taking away a woman's right to choose. I guess depending on if you have a, "D," for Democrat after your name or, "R," for Republican that is a bigger factor in determining if you qualify for the Presidency in the eyes of conservatives as opposed to where you were actually, you know, born.

The hypocrisy of all this is mind-blowing. Besides people he poses a direct political threat to such as Donald Trump speaking-up about the Canadian-birth issue (and Trump of course led the rallying cry against Obama being a citizen, but this time has a leg to stand on), it suddenly seems the Republican party is perfectly okay with someone who was born in another country--but to an American parent--running for the Presidency. It really irritates me that the Republican party can't even be Xenophobic in a coherent way, and that is what bugs me the most about Ted Cruz.
Posted by David Charles Bitterbaum at 2:03 PM