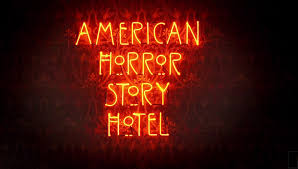 Normally when you start watching a show in its fifth season that is a recipe for utter confusion, especially if you've missed a couple episodes and just have seen some highlights or heard from friends what happened. I mean, how would you have any clue what's going on? Thankfully, when it is more of an anthology show where every season is mostly separate from the last, it isn't as big of an issue. Plus, if you're a show as odd and overwhelming as, "American Horror Story: Hotel," being thrown-off by all the madness is just part of the fun.

Yes, I finally started checking-out, "American Horror Story," with its, "Hotel," season (there is indeed a pun in my saying, "Checking-out," and, "Hotel." Congrats if you noticed). It is a series that likes to fill itself to the brim with plots, subplots, back-stories and etc. This season alone we've had vampires (well, the show insists they're not vampires, but if they drink blood and are immortal I'm gonna say, "Vampire," okay?), biblical-themed serial killers, old-timey ghosts, Kathy Bates killing the guy who played Blaine on, "Glee," a transgender individual named Liz coming into her own as a person, vampire children, Lady Gaga proving she is actually quite the skilled actress (she just won a Golden Globe for it), and Matt Bomer doing the best dance ever to Hotline Bling besides Drake's own moves (I really hope this embedded video works for all time as it is just glorious):

Oh, and because this is, "American Horror Story," there has also been a lot of sex, like the kind of sexual imagery that makes you realize FX really is almost like HBO without the extra cost and the word, "Fuck," being uttered aloud.

Apparently this season of, "American Horror Story," does tie-in to previous seasons in some ways, with a, "Murder House," from the 1st season appearing and some witch-related business from season 3 occurring too. That said, this does stand alone quite nicely as I never thought, "I have no idea what is going on," to any greater degree than the show wants viewers to feel--because as I mentioned, a lot is going on at once in this series. 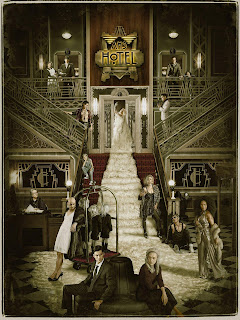 I would say I like, "American Horror Story: Hotel," despite the rampant shift in tone that can occur within a single scene (things can go from funny to gruesome at the drop of a hat) and the fact that there probably is too much going on in terms of the sheer amount of storylines. Yes, "American Horror Story: Hotel," is definitely a series that can be messy--and I don't just mean the blood and other bodily fluids--but it has a strange charm about the way it seems like the show just does whatever it wants, be that going off on random tangents with mostly pointless flashbacks, killing off a character just a few minutes after they are introduced, or otherwise being really bizarre.

I don't know if I've loved this season enough I would actively go out and view the first four, but my interest is definitely piqued to a degree where I think I'll check out season 6 when it occurs in the near future. I'm not going to post an actual review/score of the season because the finale is this Wednesday at 10PM EST and I'm still curious if it will somehow tie everything (or most things) together, or fall apart into a horrendous mess. That, and I haven't even seen all of this season as I mentioned. Still, without any actual stars awarded I can say this is a fun program to watch, and at the end of the day that's quite an important factor.
Posted by David Charles Bitterbaum at 12:18 AM