B.o.B. Thinks the Earth is Flat AKA Just When I Think People Couldn't Be Any More Ignorant... 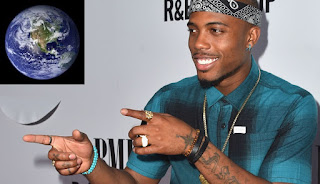 I really am sad people can be so ignorant. I understand why some conspiracy theories appeal to folk, I honestly do. It is easier to think the Government/New World Order/Etc. is behind a mass-shooting and staged the whole thing than to face the terrible fact that sometimes people are pointlessly horrible. Pretending that, "They," hired crisis actors and nobody actually got hurt is less scary than how a deranged individual can randomly go shoot-up a school, government building, etc. That said, some conspiracy theories are so absurd and so foolish, who could believe them? I guess B.o.B. does.

You may know B.o.B. from hits songs he appeared on such as, "Paper Planes," and...yeah, "Paper Planes." Well, B.o.B. is a believer in the idea that the Earth is flat, you know, like people centuries ago thought before we used knowledge to prove the planet is round. Plenty of folk have tried to correct how B.o.B. is horribly wrong, with Neil deGrasse Tyson even chiming in on Twitter, but I doubt B.o.B. will be easily swayed at this point--I mean the man also denies we landed on the Moon and thinks people steal and clone celebrities, because why not?
I guess this all boils down to how people want to be able to think they know something nobody else does, and that makes them special--that or the desire to think the world has some secret order to it. It is easier to throw away logic and sense for the comfort of a grand delusion.. As Alan Moore put it so well some years ago, "The main thing that I learned about conspiracy theory is that conspiracy theorists actually believe in a conspiracy because that is more comforting. The truth of the world is that it is chaotic. The truth is, that it is not the Jewish banking conspiracy or the grey aliens or the 12 foot reptiloids from another dimension that are in control. The truth is more frightening, nobody is in control. The world is rudderless." I would argue that is more terrifying than any conspiracy theory.

Who knows, maybe B.o.B isn't actually this dumb, and it is all part of some weird viral-marketing stunt for a new album he'll give a name like, "Conspiracy Theories." I would like to hope that's the case, but at this point I honestly am just sad.
Posted by David Charles Bitterbaum at 9:05 PM