The Surreal Juxtaposition of Sexuality and Religion on, "Church," by BJ the Chicago Kid (Featuring Chance the Rapper and Buddy) 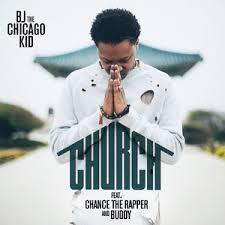 I've recovering from my absurd amount of posts I did at the end of 2015 and feel like kicking this year off with some musings about music. So then, suppose I told you there was a rap song that came out a bit ago which is definitely not gospel rap as it is pretty raunchy, but does an impressive job of introducing religious elements, sexual desire, and somehow makes the fact it is both dirty and religion-minded work? Yeah, that sounds like an oddly fascinating song, and, "Oddly fascinating," is a great way to describe the tune, "Church," by BJ the Chicago Kid, featuring Chance the Rapper and Buddy.

But I Got Church in the Morning

The song opens, "She say she wanna drink do drugs and have sex tonight," which sounds like the first verse of countless rap joints, but then it follows-up with, "But I got church in the morning," and suddenly a whole new fascinating element has been added to this song. BJ the Chicago kid has introduced to us this concept of the seductive woman who is eager to have sex and misbehave, but adds the element of how he, our protagonist, is tempted to get wild, but knows he would be far too messed-up to then go to church in the morning. BJ is basically asking how he can give-in to this ostensibly preferred world of sex, drugs, and alcohol, yet still balance that with the fact he wants to feel like a good person--something he achieves through attending church.

We all of course have lives full of temptations and urges that could interrupt our desire to also be a fulfilled person. It doesn't have to be, "Church in the morning," that keeps us from being irresponsible. It could be that we want to drink and be wild, but have work the next day, or a friend's child we need to babysit, the list goes on. BJ strikes a nerve with this song however, as so much mainstream rap is about sex, drugs, and drinking, and he's discussing how all that looks great, but hey, he has church the next morning--and then adds one more interesting idea with the, "Sinful woman," at the end too (more on that shortly).

Don't Wanna Be Saved
The lyrics vary between BJ talking about how any other day he probably might have, "Took that cake," and using cleverly dirty metaphors, "Walls like Jericho, pussy like here you go," with the walls being the bible story about the how Canaanites had their defensive walls broken down by the Israelite army, and BJ is essentially saying the woman has let down her, "Walls," and is eager to engage in sex. The jam also has Chance the Rapper stating that, "Hopefully we can go to Heaven/I pray/Hopefully we can go to Heaven/cause' I'm staying," making it clear that while BJ may be struggling with what to do, Chance the Rapper is more in the mindset of getting messed-up and having sexual relations.

The music video for the song continues this theme, with its mixture of our song's artists being, "confronted," as it were with a scantily-clad and sexy woman who clearly is eager to have sex, with this followed by imagery of church, people singing, and a preacher sweating whilst exclaiming his sermon. We vary between these images, until at the conclusion of the song we see everyone in church--as well as the thought-to-be-scandalous woman arriving decked-out in a beautiful sun-dress, illustrating that even the stereotypical idea of the woman being the temptress and the man being the wholesome God-fearing individual doesn't always stand, because after all, even if she had some drinks, did drugs, and then had sex, she's here in church now too, so who the Hell are you to judge?
When it comes to the overall message of the song I would say it is one of confusion. BJ is unsure if he wants to give in to his urge to be reckless, do things he thinks will make him too tired or hung-over to attend church the next day. The song leaves it a bit unclear what he decides, however the video shows he did indeed end-up at church, but, so too did the woman he thought was tempting him to misbehave in a way not unlike a metaphor of Eve tempting Adam with the apple (booze, drugs, and sex being the stand-in here). While the song perhaps comes-off as a bit patriarchal in its showing of the woman as being the, "Wrong," one who wants to be bad, the video actually turns all this on its head with her showing up to church, arguably making her stronger than the man in that she can do drink, do drugs, and have sex, but still summon the strength to go to church/work/etc. in the morning.

It's a fascinating song and video, with the mixture of religion, sexuality, and its taking of the regressive idea of the woman as a sinful creature who needs her chastity protected by the wise man and flipping that at the end (at least in the video, it could be argued the song by itself portrays the sung-about woman in a more derogatory way as a solely sexual creature). Yes, this is a rare case where the music-video actually adds to the song and introduces some interesting things to mull over about the meaning of what is sung about and shown. The music and imagery all combine to form an incredibly interesting piece of media that as you can see from my article clearly sparked a lot of thought in me, and may very well in you too.
Posted by David Charles Bitterbaum at 11:20 AM