"Convergence" is a Fascinating Mess 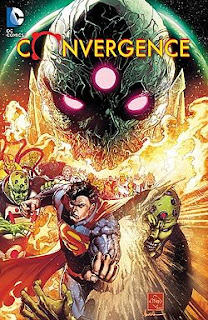 I read the DC event, "Convergence," in a big ol' hardcover thanks to my local library. Perhaps if I read some of the tie-ins things will make a bit more sense, but as far as I can tell, "Convergence," is just one big mess, yet a fascinating one too. Basically an excuse for fans to get to see characters they liked from various eras or alternate worlds, it sounds like something pretty straightforward, so of course DC has to go and muck it up.

This comic-event of course occurred to fill the gap for when DC moved their offices and at first looked like it would be a fun little thing for the fans but then it was decided it had to be some kind of mega-event and got hella bloated. We've got characters from the, "Earth 2," comics that apparently petered out before tying into this, there's the Nu52 folk, individuals from Zero Hour, Flashpoint, the DC stuff that existed after the first crisis up until the Nu52, and for good measure hints of other realities and comics too. 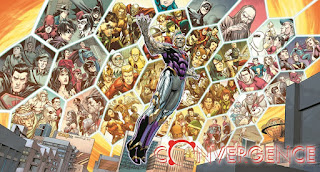 The plot of this comic involves a planet that is a desert full of little bottled cities being forced to fight each other, but that plot kind of goes away and turns into an epic battle against a villain named Telos...who then becomes good and helps everyone fight Brainiac, before everyone gets to go home and the world is wiped out...or something. But wait, it's okay because the planet turns into a new home for the, "Earth 2," folk and everyone is happy! Okay, everyone but the readers who are left scratching their head trying to figure out what the dickens just happened with all these shifting alliances, unmentioned realities suddenly popping-up, and general chaos.

Still, there is something almost Zen about a plot that takes six paragraphs to even summarize on Wikipedia and still makes little-to-no sense. A reader doesn't have to worry about why the things that occur are happening, they just kind of do and that's that. DC needed to kill some time so they threw all their toys in a fictional sandbox (literally, it is a desert world) and tried to come-up with some excuse for everyone to occupy the same page. In terms of actually being an interesting or coherent story, it is well below average, something like...
2 out of 5 stars. 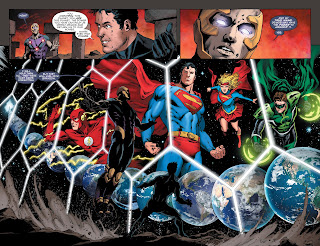 However, when it comes to being passable entertainment that one can at least admire for its tenacity and commitment to being batshit crazy and insiting it makes sense when it doesn't, well, that makes this the kind of comic I feel I can give...
3 out of 5 stars.

So, check out, "Convergence," not if you want something well-crafted or clever, but if you get a kick out of alternate-reality comics and seeing a mish-mash of ideas splattered on the page with little regard for logic. I mean, at least after this DC has settled down and won't be doing anything else dramatic for...wait, what's this about a, "Rebirth?" Oh motherfu...
Posted by David Charles Bitterbaum at 11:54 AM