Three stories involving Zombies and Robots in One Book. 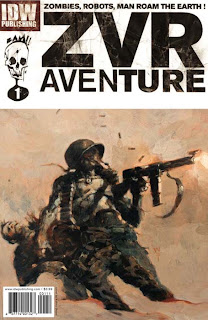 ZVR Aventure
No, That's not a typo, it actually is spelled Aventure. This large hardcover collects the four issues of the series that involved three different stories by three different artists but written by the original series author, Chris Ryall. Without Ashley Wood were things any good? More or less.


I really missed having Ashley Wood illustrating a Zombies VS Robots book, but the other artists did do a good job. The first story, "Kampf" has amazing art by someone named Menton3 who illustrates in a way that looks both life-like and stylized for amazing and dark results. I have no complaint about the art for this section, but found the story to be a bit dark for the usually more humorous feeling of ZVR. This was maybe the weakest of the three stories in terms of actual "story" content, but had the best art. I swear, this Menton3 fellow has amazing skills, just look at his website. Of the three stories this is the 2nd best/2nd worst.
The 2nd story in the collection is a humorous story titled , Masques, which deals with a young man finding an Iron-Man-esque armor (the story almost outright says "Iron Man", even) and taking on the zombies to darkly funny and gory results. The art was decent and cartoon-ish thanks to Paul McCaffrey, the story was okay too, but nothing really stuck out to me as impressive, and the joke of our protagonist being a bit dumb and over-confident grows old. I did not expect such a twisted ending that did occur however, so extra credit for that. This was my least favorite story--which is not to say it is bad, just not too impressive compared to the other two entries.
The last story was also my favorite, titled, "Zuvembie Vs. Robots it has great art by Gabriel Hernandez that while reminiscent of Ashley Wood's work also is unique enough to stand on its own. The story is about a master of voodoo summoning his own zombies (or "zuvembies") to fight against the zombie plague ravaging the world. Robots show up and funny and zany events ensue. The solid art combined with the silly story results in an enjoyable time. If only the whole book had been as good as the last story.

Overall this book is a good collection, if not as enjoyable as the main ZVR comic or its sequel with the Amazonian women thrown into the fight. We have a weak story with amazing art, an okay story with decent art, and a delightful story with great art. All of the combined bring us to a total of about...
3 out of 5 stars.
Posted by David Charles Bitterbaum at 11:00 AM