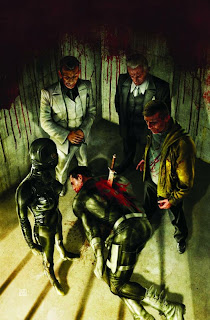 Punisher: In The Blood #4
After my relatively cool feelings for issue three, how did #4 fare against my opinion? Also, be warned I spoil one plot point.


As the title for the post says, this issue is brutal. From the shocking blood-sprays as multiple characters get knifed (a bit of theme this issue) to Jigsaw repeatedly shooting someone in the face, all the build-up that occurred in the previous issues--which resulted in my somewhat being bored--has finally started paying off. I should have known that Rick Remender--who has been doing this long run on the Punisher--wouldn't let me down, he never does (except for that terrible Deadpool comic, but that's the exception that proves the rule). I also was pleased that it turned out it wasn't the Punisher's wife who had been brought back from the dead plaguing him, but instead a villain he had faced in the past who wanted revenge. I thought it kind of hurt mythology of the Punisher if his wife had actually been successfully brought back and survived Frank's torching everyone back in Punisher series by Remender that preceded this mini-series. Still, the scene at the opening where watches what he thinks with his wife with the Jigsaws is still pretty dark. 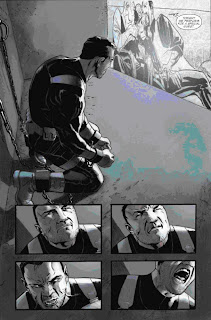 This issue ends with quit the cliff-hanger and I am excited to see Remender use the next issue to wrap everything he has done over Puniher: War Journal, Punisher, and this mini-series. It is pretty awesome stuff and shouldn't be ignored as it seems people have sadly been doing since the outrageous Frankencastle story-arc that got lots of attention but didn't bring readers over to this mini.
4 out of 5 stars.
Posted by David Charles Bitterbaum at 1:48 PM