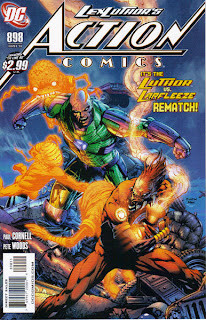 Action Comics #898
The ninth(!) entry in the ten-part story arc (not counting the upcoming #900 with Lex and Superman coming face-to-face) by Paul Cornell featuring some incredible storytelling with Pete Woods drawing. How does this penultimate issue go? Great as always.

We've got some big reveals, some more shocking acts by Lex Luthor that show just how ruthless he can be, and at the end of this issue the big baddie whom has been masterminding all the trouble Lex has faced is unveiled meaning that the next issue is bound to be a humdinger. How is this issue though? Quality. It can be hard when a comic is this consistently great because you run out of nice things to say, as opposed to when something is terrible and there are practically limitless ways to declare it awful. Paul Cornell is just such a great writer, he has a unique flair for dialogue that has his "feel" but also reflects the character speaking so as not to make it seem like it's just Cornell talking through Luthor (for example, I love Warren Ellis, but sometimes his characters are just mouthpieces for his thoughts). 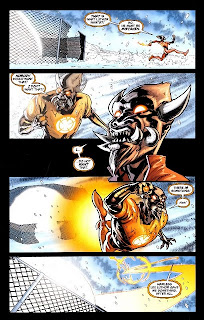 Pete Woods draws some great fighting between Lex and the Orange Lantern Larfleeze, even if the Orange Lantern does look a bit different than in the Green Lantern books (a bit more monster-like than animalistic, if that makes sense). The flow of the comic is superb, with a real feeling of motion in the action-packed panels. 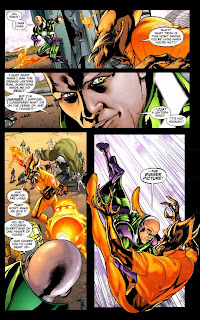 This is a great comic, with Paul Cornell and Pete Woods consistently knocking it out of the park--to use a baseball analogy. The climax next issue and big confrontation between Luthor and Supes' after that should make for a great next couple of months if you've been enjoying this story as much as me.
4 out of 5 stars.
Posted by David Charles Bitterbaum at 1:00 PM