A Good Start For A Sequel--Abyss: Family Issues #1 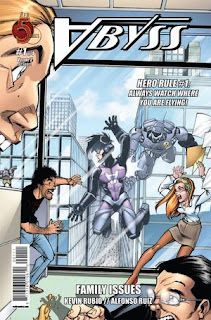 Abyss: Family Issues #1
The sequel to one of Red5 Comics debut series when they first started publishing, I've been waiting for more Abyss. Besides the sublime Atomic Robo this has been my favorite series despite only having had one mini before this one. How does this sequel compare to the first series based on the first issue? Let's discuss.


Eric Hoffman's father was the worst super-villain in the world, and to redeem his name Eric became a super-hero. That is the basic plot of the first series even though all sorts of fun stuff happened and you should really read it. This 2nd series is also good, with nice art, humorous jokes, and pop-culture references cleverly sprinkled in for those with eagle-eyes (the Heli-Pad that looks just like the Watchmen logo on the first page for instance). This is a good meaty issue, with some action scenes and clever dialogue between our protagonist and other heroes--both those kind towards and critical of him. This issue has the usual problem an opening faces, in that much of the time is spent setting up the plot so that the action can come later, but I still really enjoyed this comic and strongly recommend you pick up the original trade paperback then this issue.
4 out of 5 stars
Abyss Volume 1 TP

for the first trade (which I didn't review here but would give 4 out of 5 stars also).
Posted by David Charles Bitterbaum at 6:48 PM