When a Situation Makes Eric Andre be Serious, You Know it is Bad 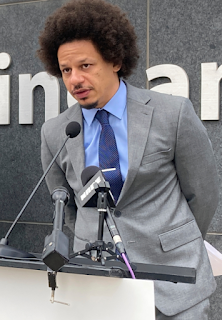 Eric Andre is a hilarious individual. From acting in various television shows or movies to doing his surreal talk show/variety show/fever dream of a program, "The Eric Andre Show." I rarely have seen him on camera not being silly, so when he's deadly serious you know something is horrifically messed-up. Well, a program done at airports that asks people to allow a, "Consensual," search in the name of finding drugs that clearly engages in racial profiling--and almost never found anything but essentially stole money from travelers, is pretty darn bad.

Hence, Eric Andre and another comedian, Clayton English (who on a separate occasion found himself harassed with no probable cause) have filed a federal lawsuit against Georgia's police department in an effort to get the, "Jet bridge interdiction program," declared unconstitutional. The program sounds like it fails in every manner besides providing the department with ill-gotten cash, so I wish Andre and English luck in getting it shut down.