Film Friday: "Ant-Man: Quantumania," Looks Interesting. I Do Have One Nagging Concern 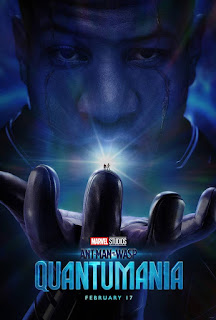 I watched the trailer for the new, "Ant-Man: Quantumania," film the other day. It looks kind of like Marvel meets Star Wars (both owned by Disney, funnily enough) as they go into the Quantum realm and encounter all kinds of alien Worlds as well as Kang. It looks fun, but I have this nagging feeling that it will feel less self-contained than the other flicks with Ant-Man and instead feel like one big lead-in to the Avengers movie featuring Kang ("Avengers: the Kang Dynasty," which itself will lead to, "Avengers: Secret Wars." The man playing Kang, Jonathan Majors, is a fantastic actor and he was stellar as a variant of Kang (He Who Remains) in the, "Loki," show. I do wonder if those who skipped Loki will be a bit confused by who exactly he is, however.

I imagine the movie will be good fun, but I hope it gets to do some of its own thing as well as setting up all the future stuff. We've seen what happens when a Marvel movie is more concerned with getting upcoming projects teased than telling its own story--we get, "Avengers: Age of Ultron." That was a perfectly fine movie, but it ain't on anyone's top 5 list for best MCU movies and shows. No matter what, at least we'll get more of Paul Rudd, that man is a treasure.