"Werewolf by Night," is My Favorite Marvel Production In Some Time! 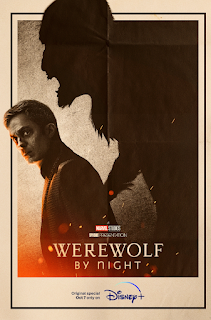 It isn't quite a movie considering it clocks in at under an hour and it is a single episode as opposed to a streaming show. This makes it hard to say what exactly the new Disney+ addition, "Werewolf by Night," is besides calling it a, "Special." You know what? That works, as this was wonderfully special indeed. Brisk, action-packed, a little scary (but not too frightful), and with atmosphere and mood to spare, I loved, "Werewolf by Night." This has to be one of my favorite Marvel Cinematic Universe projects in quite some time.
The plot of the special is mostly straightforward. Ulysses Bloodstone has died and a bunch of monster hunters--including his estranged daughter--have shown up to fight for the rights to his bloodstone. The show is basically all black-and-white except the Bloodstone, which glows an equally impressive and imposing red. The hunters are mostly nameless tough guys/gals besides Elsa Bloodstone (Laura Donnelly) and Jack Russel (Gael García Bernal). Plus, Harriet Sansom Harris, is fantastic as Elsa's horribly twisted mother. The monster everyone ends up hunting has been hinted at by trailers so it isn't too big a spoiler to say it is the Man-Thing. As such a name would probably inspire a few giggles he is referred to as either just, "The Monster," or his name, Ted (he was Ted Sallis in the comics too before his change). We watch the hunters fighting, some awesome special effects occur, and we wrap up before even 60 minutes have passed in a nice succinct manner. 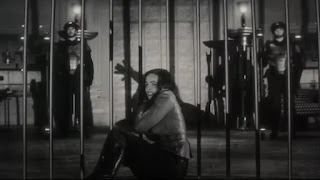 The general tone is a bit more serious than lots of other Marvel projects lately. There are some funny moments, but this special is more interested in knowing winks at classic horror movies than telling puns. I don't mind the quippy movies and shows in the MCU, but this cleverly worked just a little humor in at the right moments and balanced any levity expertly with action and horror. It was a treat. This is without a doubt one of the best things to come from the MCU in some time, with director and composer Michael Giacchino creating something quite amazing. More of this from Marvel, please.
Posted by David Charles Bitterbaum at 10:16 PM