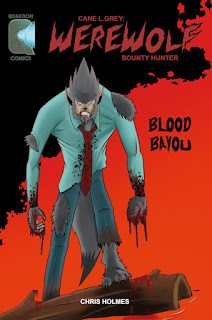 "Cane L. Grey: Werewolf Bounty Hunter," is currently Kickstarting its first issue--I had the chance to an advance copy and I was quite impressed! Written and illustrated by Chris Holmes, this debut issue follows a man who claims to be a reporter looking for stories about monsters in the Louisana bayou. It isn't too big of a spoiler to say this man isn't who he claims and the person who says they can tell him more about the monsters is fibbing a bit too. The story uses scary creatures but isn't a horror comic so much as it is a bit sci-fi (with its discussion of many cryptids existing and having a tenuous treaty with humans) and loaded with a great action-filled fight scene. My interest was especially piqued at the end when the titular bounty hunter (who is also a werewolf, obviously) is informed of a new monster that also has political aspirations--a clever little twist that gets me excited for more issues after this one!

The art in, "Cane L. Grey: Werewolf Bounty Hunter," is great. It has a little bit of a cartoony edge that makes the monsters more fun and wild-looking than overly gruesome, but everything is still grounded enough to seem set in a possible feasible reality where monsters could very well secretly lurk among us, only held at bay through complex agreements to be left alone by society. Between the fun story and delightful art, I really enjoyed this comic and would encourage you to check the Kickstarter out at this link.